The World According to Dave: Broken English

My wife recently pointed out something I do that I previously wasn’t even aware of, at least not consciously: When conversing with fresh-off-the-boat Asian people, I have a tendency to speak in broken English.

Though I’d only just been made aware of this quirk, I instantly understood why—because it makes me feel more Asian around them. I feel self-conscious when an Asian inquires (in my mind, accusatorily) if I know how to speak my native language, if I regularly visit Korea, etc. This volley of questions renders me unable to recall simple verbs, and my understanding of sentence construction devolves by approximately 40 percent. Truth be told, I’m so Americanized that I can’t even authentically mangle my speech; I simply rearrange phrases so it sounds more Yoda than legitimate broken English.

I explained this to my wife, and it failed to placate her. “It’s ignorant, or rude, don’t you think?”

“It would be if I wasn’t Korean,” I defended. “It’s like how blacks take ownership of slurs against them in hip-hop lyrics or something.”

“That’s totally different.” “I beg to differ,” I replied. “I’m an equal opportunity disguiser of my speaking abilities, like how I adopt a Bostonian accent when I talk to locals about the Sox. ‘Wicked pisser’ is not normally in my vocabulary, and yet you never call me on it.”

“It’s accommodating! I’m making people feel comfortable around me. It’s like I’m a … language concierge or something.”

She rolled her eyes at me.

That evening we attended the annual block party, and I invariably end up standing next to Paul, the only other Asian guy in the neighborhood. We exchange artificial pleasantries and make vague plans to barbecue together sometime, which we never follow up on.

“Hey pal…” My voice trailed off. “What’s new with you?” “Well, we had a son last fall.” I sighed. His wife eventually walked up, and it turned out she was raised in Korea. My wife suggested they come over for a beer. A nice gesture, the only problem was one critical fact: A few months back, I’d absconded with an old leather chair they’d discarded at the edge of the driveway. Technically, they’d put it out there for anyone to take, but I was mortified at the thought of them seeing it in our house. My wife suggested (since they had their kids in tow) that we hang out in my office, which doubles as Griffin’s playroom.

I went inside first and immediately draped a blanket over the chair. Of course, the wife immediately sat down in it and smiled at me.

“Comfy! Where you get?” she asked.

“I … no … remember,” I answered softly, feeling my wife boring two holes in my back with her eyes. Luckily, the couple didn’t appear to recognize their old chair, and I made a mental note to tell my wife later that another reason it’s OK I occasionally employ broken English: It helps me get out of sticky situations. 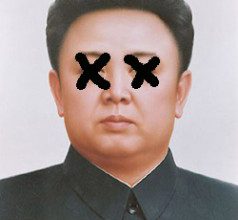