Executive Order 9066, a World War II tragedy that has resonated stronger than ever in recent months with talks of a Muslim registry in the United States, was in effect for two years.

Lawmakers of the Congressional Asian Pacific American Caucus (CAPAC), as well as leadership, made statements in remembrance of the order with warnings against xenophobia and racism, and that we must never again allow history to repeat itself.

Rep. Mark Takano, whose parents and grandparents were incarcerated in the camps, said in a statement that he believes “this government has been affected by a collective amnesia around what happens when we allow fear and discrimination to dictate policy.”

“This year, it is even more important that Congress [observe wartime injustices] as we fight the [Trump] administration’s discriminatory and divisive policy agenda,” Takano said.

“Wartime hysteria, prejudice and a lack of political leadership led to one of the most shameful periods in our nation’s history, where American citizens were targeted based solely on their ethnicity and stripped of their basic civil rights without any due process,” Rep. Judy Chu, CAPAC chair, said in a statement. “As we observe this year’s Day of Remembrance, let us recommit ourselves to rejecting prejudice and protecting the civil liberties of all Americans.”

Rep. Ted Lieu agreed. “We must stand firm against bigotry and hatred and ensure that all Americans are accorded their due rights,” he said.

Democratic Leader Rep. Nancy Pelosi pointed to Fred Korematsu, the Japanese American civil rights leader whose famous refusal of the order landed him at the U.S. Supreme Court, while Rep. Tulsi Gabbard called to honor the Nisei, Japanese Americans who despite the order signed up to fight for their country during the war. Both urged Americans to confront “injustice, xenophobia and bigotry in our own time.”

“At this moment in our history, all Americans must learn from the injustices and failures of the past to create a stronger future for all,” Pelosi said.

Here are some more statements from leaders:

Sen. Mazie Hirono: “The internment of Japanese Americans during World War II remains a dark period in our nation’s history. Whenever our country has targeted a particular ethnicity, race, national origin, or religion for discriminatory treatment, we have been very deeply wrong.”

Rep. Al Green: “While a great many people of good will view [the internment] as a shameful time in our nation’s history, there are some in power who see it as a precedent for their own invidious, ignoble ideas. Clearly we must not rest until these shameful ideas based on invidious discrimination and bigotry are truly relegated to the ash heap of history.”

Rep. Doris Matsui: “The mistakes of our past must never be forgotten or normalized. We remain committed to ensuring history does that repeat itself, and vigilant in our defense of justice for all.” 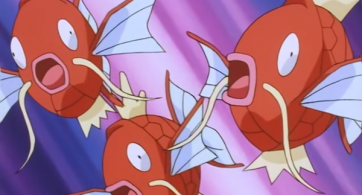 After years of playing an evil sidekick, a viral meme and delicious taiyaki, Magikarp will finally splash in its own feature mobile game, “Splash! Magikarp,” to be released in […]