New York City’s Times Square, the once-bustling tourist attraction swarming with thousands of visitors from all over the world, is now left empty and deserted under quarantine policies. Broadway is no longer buzzing with the glitz and glamour of extravagant stages and the mellifluous tones of beloved show tunes. Instead, thousands of artists and creatives who call the theater their home have been torn from their livelihoods and passions. In the wake of the COVID-19 pandemic, the city that never sleeps is forced to come to an abrupt halt, indefinitely— and with it, an entire industry.

New York has become the epicenter of America’s novel coronavirus outbreak, with a recorded 107,263 cases as of April 14, according to the city’s health department. With the White House handing out bailouts to every- thing from manufacturers to airlines, the arts and entertainment industries are being left in the dust. Thanks to the ever-growing consumer trend of streaming, Hollywood has found solutions to make up for closed movie theaters by releasing new films directly to online platforms. But what about live theater? How does an industry reliant on the ticket sales of live audiences and tourism stay afloat during a period of indefinite quarantine? Well, that’s more tricky.

On March 12, New York Governor Andrew Cuomo banned gatherings of more than 500 people, forcing all theaters to shut down. According to the Broadway League, a national trade association representing producers and operators, the 41 theaters that make up Broadway will remain closed until at least June 7. But even that date is tentative, as Cuomo expressed skepticism over their proposed reopening date. In an early April news conference, he stated, “I wouldn’t use what Broadway thinks as a barometer of anything, unless they’re in the public health business.”

There were 31 shows on Broadway that were forced to close, but some productions never even saw the light of day. New shows that were scheduled to open in the spring have either been postponed or killed before even get- ting a premiere on Broadway, such as “Who’s Afraid of Virginia Woolf?” and “Hangmen.” Even the 2020 Tony Awards ceremony, originally scheduled for June 7, has been postponed until an undecided date. Given that Broadway performances drew 14.8 million patrons last season and grossed $1.8 billion, according to the “New York Times,” this shutdown is expected to cost the industry millions of dollars and impact the jobs of thousands of workers. From theater ushers to stage managers, the coronavirus has left many unemployed, Asian American and Pacific Islander actors included.

Tony-nominated actress Ashley Park (known for her roles as Tuptim in the 2015 revival of “The King and I“ and Gretchen Wieners in “Mean Girls“) was set to headline a much-anticipated Encores! staging of “Thoroughly Modern Millie“ in May, but now, the New York City Center has announced that it’s been canceled due to the pandemic. Other AAPI actors who were under a Broadway spotlight before the shutdown include “Beetlejuice“’s Kelvin Moon Loh, “Hadestown“’s Eva Noblezada and “Come From Away“’s Pearl Sun. But despite these challenges and losses, the AAPI theater community have found ways to think positively in the current situation. In an Instagram post, Park expresses hope and words of encouragement despite her show’s cancellation: “To the adults of ‘gig to gig’ economy [sic] & especially my industry of the Arts … don’t allow this Corona curveball to spiral you into thinking the universe is out to get you … we will come back stronger, better and more courteously gracious & protective of this world of ours and of each other.”

And as discrimination against Asians and Asian Americans ignites under the pandemic, AAPI theater actors have come together to rally against the growing xenophobia. Actor and director Diane Phelan (“School of Rock“), who’s a part of the Broadway Diversity Project, organized a campaign called #RacismIsAVirus, which has gained support from fellow Broadway actors such as Marc delaCruz (“Hamilton“), Telly Leung (“Aladdin,” “Rent“) and Ann Harada (“Avenue Q“). In a call to action to post selfies on social media with the hashtag, Phelan writes in her Instagram that “what is most important is seeing Asian and all faces standing up to this racism.”

In a time when tensions and unease run rampant throughout the theater industry, actors and creatives are still finding ways to bring both people and art together. The news website BroadwayWorld started “Living Room Concerts,” where Broadway stars perform online from their homes. The lineup of performers have included “Hamilton” creator Lin-Manuel Miranda, “Dear Evan Hansen“’s Gabrielle Carrubba and “Hercules“’ Susan Egan. Other live-stream concert series include “Stars in the House,” hosted by SiriusXM Broadway host Seth Rudetsky and producer James Wesley, which supports the Actors Fund and its services during the shutdown. Meanwhile, Universal Pictures has launched a free YouTube channel called the Shows Must Go On, which streams performances from Broadway musicals.

Although an emergency relief agreement negotiated by the Broadway League and 14 labor unions has been set up to aid Broadway employees with pay and health insurance during the shutdown, the industry still faces many challenges and adversities ahead. Perhaps what has become most apparent is the importance of and need for the arts. As millions of people across the globe deal with the effects of the pandemic, it is the arts that provide us the comfort, entertainment and relief needed in these dark times. 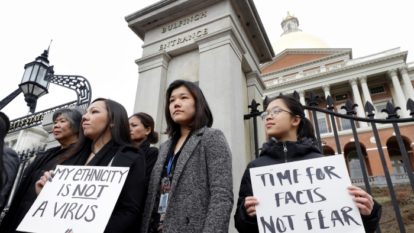 In mid-February, in California’s San Fernando Valley, a 16-year-old Asian American boy was attacked and sent to the emergency room by classmates who accused him of having the coronavirus. […]