“I come from a land of virgins. It’s true, I do. It’s called Pakistan,” goes one of Mona Shaikh’s sets, performed at the Westside Comedy Theatre. She grew up in Pakistan and immigrated to the U.S. with her family when she was 15. “For the longest time, I’ve wondered why men are so obsessed with virgins; and really, it just boils down to the fact that they just don’t like criticism.”

Shaikh has taken her bold, raunchy and thought-provoking comedy to venues like The Comedy Store, Flappers Comedy Club and the Laugh Factory. She was the first female Pakistani comedian to be selected for the Laugh Factory’s Funniest Person in the World Contest and to headline Hollywood Improv.

Her journey started with a push from a New York friend, who suggested that she try her hand in stand-up. Here’s our talk with Shaikh.

When you first discovered that you wanted to pursue comedy, did you tell anybody?

Well, my mom was there when I did my first open mic. That was an interesting and really great, fun experience. My girlfriend who insisted that I try my hand at stand-up was also there. I quite frankly was not expecting much from it. I wasn’t like, “Yeah, this is going to be my future.” I thought, “I’m just going to try it, and if I bomb it, then I’m never going to do it again.” Thank god I didn’t bomb it.

How did your mom respond to your performance?

There’s this thing called a language barrier, so she couldn’t understand half of the stuff that I was saying. My mom speaks English, but she’s not super fluent in it. So she couldn’t really understand a lot of my dirty jokes that I was doing on stage. All she kept saying was, “That’s my daughter!” People were like, “Oh my god. You have no idea what she’s saying up there, do you?” My mom was just proud of me while I was too busy slinging dick jokes on stage. It was great, and a moment of pride.

If you were to perform your comedy act in Pakistan, how do you think they would react?

I have a lot of fans in Pakistan. I think the moderates and progressives love my comedy. They love the fact that I make fun of parts of the culture that are screwed up. But if I were to do stand-up comedy there the way I do it here, I would say that I would probably be six-feet-under.

When you perform your comedy act, is there anything that you like to focus on specifically?

A lot of my stuff is cultural, current event-based, political, religious and other stuff that I like to talk about. I do talk a lot about racial stuff, and of course, who doesn’t like a good dick joke? I do like to talk about sexual stuff because we are sexual beings.

How would you describe your journey to becoming a comedian?

I would say that anyone who tried to pursue stand-up would tell you that it is not an easy journey. There’s a lot of eating s–t on stage and learning from your mistakes. You basically have to have a level of masochism to you to keep going up on stage and keep trying out new material and failing, but still keep going back and then finally finding victory. I would say that I’ve been pretty fortunate that a lot of good things happened for me in a pretty short period of time, considering that the average comedian gets their break 15 years in.

I’m seven years in right now, and I’ve been pretty fortunate to get a lot of great breaks. I’ve headlined Dubai, I’ve headlined Portugal, and I’ve headlined Hollywood Improv with Dane Cook. I’ve made history like five times in the past two years. So I’ve been pretty fortunate in that sense. Is it a struggle? Absolutely it is! While your friends are out partying on a Friday or Saturday night, you’re out there writing. That’s the sacrifice, love and dedication that it takes. I honestly wouldn’t sacrifice it for anything in the world.

How do you feel now after making so many accomplishments?

You would think that even after all these great accomplishments that I would feel some level of satisfaction — I don’t. I feel like my journey is so much further ahead because I have such big goals that I set for myself. These accomplishments are small victories. Am I saying that they’re not good? No, they’re great. They’re small steps that lead to bigger things. But I wouldn’t in any way say that I’m satisfied because they’re not the goals that I set up for myself.

What would you say that those goals are?

Speaking about producing, I noticed that you also produce your own comedy show called “Minority Reportz.”

I do. That’s my baby. Do you remember the whole #OscarsSoWhite thing that went down? I’m glad that it went down because it woke the executives up and I think it woke a lot of people in the industry up. That happened in January of 2016. We were already ahead of the curb. I started “Minority Reportz” back in September of 2015 because I already saw a need for it. Mainly because when I go to bigger comedy clubs, I see that the majority of comedians are all white, heterosexual males. That’s who they book all the time. A white heterosexual male will get a lot more breaks, even if he’s average or slightly good. They would get a lot more breaks even if I were going out there killing it. That’s just kind of the way it is right now.

Do you have any role models that you look up to in the comedy world?

I would say my top two role models would be George Carlin and Chris Rock. Those are my two great influences.

They’re smart, they’re bold, and they’re not afraid to be raunchy but also make a brilliant point. They bring in a fresher point that nobody else is really talking about. It’s kind of balls-out-in-your-face comedy, and I really love that. That speaks to me a lot.

In a way, it’s kind of similar to your own comedy acts as well.

Absolutely. I feel like my stuff is getting a lot bolder. I recently opened for Patton Oswalt to a sold-out crowd of 800. It was interesting. I don’t know if you know about Patton Oswalt and his followers, but they’re mostly white, educated and have an age range of 30s to 60s. They’re really smart, liberal and super-cool people. When I was opening for him, I was like, “Okay, I don’t know how they’re going to like some of my stuff that I’m about to talk about.” I’m Muslim and I wanted to talk about a lot of the issues that plague the Muslim world today. For instance, one of the things that is constantly talked about that you’ll hear in the media all the time is that Islam is “a religion of peace.” I beg to differ. [I said] Islam is not a religion of peace, and I have a whole breakdown, which I did. They loved it. This was a pretty liberal crowd, and I had people walking up to me after the show. This lady walked up to me, and she was like, “You got a set of ovaries on you. I like it.” And I was like, “Oh, I didn’t know that was a thing!”

That’s the type of direction that I want my comedy to be: bold. You know what the greatest thing about George Carlin’s and Chris Rock’s comedy is to me? It’s incredibly entertaining; it’s incredibly funny, and so damn meaningful. It makes you think. You remember the jokes from Chris Rock. I was watching his bit about black people versus the n-word, and it’s genius and it’s bold. I’m sure he got shit for it, but god damn it, somebody’s gotta say it. And thank you for saying it. That’s amazing. I know that eventually I’m going to get some sort of backlash and that people are going to comment, fight with me, or call me names, but I don’t really give a s–t. It’s just like George Carlin says: “You just have to reach a point in your art where you don’t give a s–t.” I’m going to say what’s true to me, and I feel like that’s where I am in my life right now.

This interview has been edited for length and clarity. 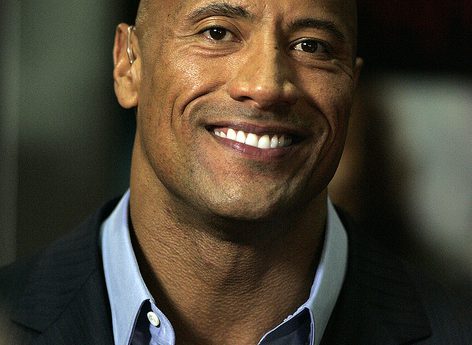 LOS ANGELES — After conquering Hollywood, Dwayne “The Rock” Johnson may have his sights set on the White House. The actor and former pro wrestler tells GQ that a […]