Randall Park, who played Kim Jong-un in the controversial comedy The Interview, gave a surprisingly nonchalant response on Wednesday to the cyberattack on Sony Pictures.

“I was never worried about my safety or getting hacked,” Park told reporters at the 2015 Television Critics Association Winter Press Tour. “It was crazy to turn on the news and they were talking about Kim Jong-un, but showing my face.”

Although the 40-year-old actor participated in the panel to talk about his upcoming ABC family sitcom, Fresh Off the Boat, the press couldn’t help but ask questions about his last gig.

“Everything died down right after the movie came out,” Park said. “I still haven’t fully pieced everything together as far as what that experience meant to me.

A few weeks before The Interview‘s scheduled Christmas Day release, the hackers leaked private emails of studio executives and Hollywood stars, and they threatened a 9/11-like attack on any movie theater screening the film. As a result, Sony canceled the film’s theatrical release.The FBI later accused North Korea of being responsible for the cyberattack. Pyongyang, however, denied these allegations despite calling the hack “a righteous deed.”

“Nobody wanted to sit next to Randall on the set that week,” joked, Nahnatchka Khan, writer and executive producer of Fresh Off the Boat.

“I was just really happy it came out and people got the chance to see the movie,” Park added.

The Interview ultimately became available to rent and purchase online and was screened in select theaters on Christmas Eve. The film made $5 million in limited theatrical release and $31 million in online downloads within its first week and a half of release, according to Variety.

“I am just glad that that whole chapter is done,” Park said. “Now I’m looking forward to this show.”

Fresh Off the Boat will premiere Wednesday, Feb. 4 at 8:30 p.m. on ABC before moving to its regular Tuesdays at 8 p.m. timeslot the following week. 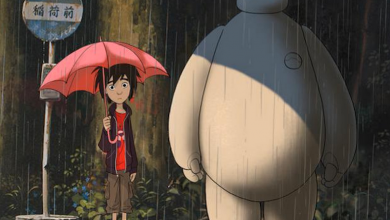 Big Hero 6‘s Baymax is easily one of the most beloved animated characters of 2014. What’s not to love about this personal healthcare provider? He’s big, huggable and […]