Today marks Korean Independence Day. Sixty-nine years ago, the nation celebrated its hard-won liberation from Japan, after 35 years of colonization. It was a day that leading independence fighter Dosan Ahn Chang-ho, sadly, never got to see. In an effort to reflect on the legacy and teachings of the revered Korean hero, who also was one of the earliest Korean American immigrants, KoreAm revisits our February 2012 story about Ahn’s induction into the International Civil Rights Walk of Fame in Atlanta, Ga.

On Jan. 6, a crowd of about 500 gathered inside the historic Ebenezer Baptist Church in Atlanta, Ga., where the Rev. Martin Luther King, Jr., virtually launched the modern-day civil rights movement. Men in suits and women donning dramatic, oversized hats mingled with the likes of hunky celebrities Tyrese and Emmitt Smith. As people filed into the pews, the digital cameras popped out not only to take paparazzi shots of some of the celebrities on hand, but also to snap the several pairs of shoes displayed in glass boxes in front of the pulpit from which Dr. King once preached about love, freedom and equality.

It was in his spirit, those in atten- dance were celebrating the induction of nine individuals into the International Civil Rights Walk of Fame. Organized by the Trumpet Awards Foundation, eight or nine civil rights figures each year are awarded a place along the sidewalk adjacent to the church, part of the Martin Luther King, Jr. National Historic site, where their footsteps are set into concrete. The 2-by-2, marble-inlaid plaques are to recognize the efforts of those who “sacrificed and struggled to make equality a reality for all,” according to the foundation.

It has historically recognized African Americans figures, with poet Maya Angelou, civil rights icon Rosa Parks and the late Supreme Court Justice Thurgood Marshall among past honorees. This year’s list, the ninth, was no different—except, that is, for one name: Dosan Ahn Chang Ho.

Korean immigrants to the United States, became the first Asian inducted, posthumously, into the Walk of Fame.

“When Ahn Chang Ho was first presented to me, I didn’t know anything about him,” admitted Xernona Clayton, president of the Trumpet Awards Foundation. “As I got more information, I was so impressed with his background and how similar his focus and mission were to Martin Luther King,” added Clayton, a former journalist and contemporary of Dr. King. “We consider him the MLK of Korea.”

Born in 1878 in Pyongyang, in what is now North Korea, Ahn dedicated his life to fighting for Korean independence from Japanese colonization in the early part of the 20th century, even in the face of imprisonment and torture. His pen name, Dosan, meaning “island mountain,” was inspired by his first sighting of Hawaii from the ship that brought him and his wife, Lee Hye Ryon (later, Helen Ahn), to the United States in 1902, and many Koreans know him by this name. Founder of the first coed school in Korea, Ahn wanted to get a Western education, with the hope of one day returning to Korea and leading educational and social reform efforts there. Even as he continued to fight for his country’s independence from abroad, he also built organizations intended to help Koreans in America become good citizens, always preaching the importance of good character, honesty and civility. As a farm laborer who picked oranges in Riverside, Calif., he would even emerge a key labor negotiator and organizer for his fellow workers.

Like the African American civil rights leader, Ahn also was a proponent of nonviolence and ultimately sacrificed his life in the name of this struggle for freedom. He was imprisoned by the Japanese six different times. In 1937 he was arrested a final time, sent to Seodaemun prison, and died in 1938 after multiple imprisonments and torture took their toll on his health.

Ahn represented such an important thinker and leader of his time that some scholars have said that there would not be a divided Korea today, had he lived to see Korea’s liberation from Japan in 1945.

That was a sentiment his grandson, Philip “Flip” Cuddy, echoed as he accepted the recent Trumpet Foundation honor on behalf of his family last month. It was clearly an emotional moment for Cuddy, who has spent many years safeguarding the legacy of his grandfather.

“Standing at the pulpit of the Ebenezer Church and having Dosan’s spirit embraced by the people involved in the Civil Rights Walk of Fame event was amazing and very emotional for me,” he said later. “Representing the first Asian to be inducted was truly an honor and humbling moment.”

Cuddy, whose mother Susan Ahn Cuddy turned 97 last month, never imagined that his grandfather’s story would reach the American South in such a significant way. The effort to include Ahn in the Walk of Fame started with a Korean American named Richard K. Lee, an Atlanta resident who was passionate about educating people about Ahn’s legacy. He asked longtime friend Terrence Williams, who serves as vice-chairman of the Lee Family Foundation, for help in finding a way to help educate the Atlanta community about Ahn. Ultimately, the Civil Rights Walk of Fame was suggested.

“We now live in a very diverse and global society,” Williams said. “We were looking for something that would allow us to have a foundation to springboard a succession of events that would ultimately culminate in activities in education, which Dosan was very much a proponent of, as well as character and integrity.”

The Trumpet Foundation’s Clayton welcomed the idea. “We learned that in order to broaden our scope and get to where we wanted to be, we had to include all people,” she said, noting her foundation’s desire to have a more global reach. “[Dosan] was the perfect candidate. Although he has passed on, he left an enduring legacy.”

When he was contacted last December with the news that his grandfather had been selected to join the Walk of Fame, Cuddy, while shocked, also drew the connection immediately.

“[Dosan is] definitely on par with Dr. King,” said Cuddy, 56, who flew in from Los Angeles for the festivities. “He just was so honest and lived his life with the conviction of what he was doing, just like Dr. King.”

Indeed, there are striking parallels between both men. Both were eloquent orators, and their words almost echo each other’s. Ahn once said, “Let us not pay evil with evil among ourselves, but let love guide us.” Dr. King, in 1967, said, “Hate cannot drive out hate; only love can do that.” Notably, Ahn was said to have loved African American spirituals, even teaching other Korean patriots the words to these songs that expressed a longing for freedom.

Unlike King’s legacy within the African American community, however, few Korean Americans today know who Dosan was. That’s something Cuddy would like to change. The recent honor in Atlanta, he said, has energized him, and he realizes the audience for learning about his grandfather is now much broader.

“They were so respectful of Dosan and embraced [his] history with warm-heartedness,” Cuddy said of members of the African American community in Atlanta he met. “I think that being accepted into another community with such heritage and to bring him into that fold with the civil rights movement of the black community is going to add, not power, but a bigger sense of meaning to what he did.”

Dosan, in a 1937 photo taken at Seodaemun Prison (Courtesy of Flip Cuddy)

This was the imprisoned Dosan’s response after the Japanese police asked him if he would give up his independence struggle:

“I don’t want to see Japan perish. Rather I want to see Japan become a good nation. Infringing upon Korea, your neighbor will never prove profitable to you. Japan will profit by having 30 million Koreans as her friendly neighbors and not by annexing 30 million spiteful people into her nation. Therefore, to assert Korean independence is tantamount to desiring peace in East Asia and the well-being of Japan.”

In his speeches and writing, he communicated democratic principles and urged his countrymen and women to respect individual differences:

“Since ancient times our people have had no tolerance to accept views different from theirs, but asserted only their view to be right, so that severe partisan strife ensued. It is as likely that I make a mistake as that others may do right. Having found that others had a view different from theirs, our ancestors branded them as villains who violated the teachings of the sages; and massacred all of their clansmen, unleashing purges of scholars and partisan feuding. This evil practice still persists today. Therefore, we must recognize and hold in high esteem the freedom of thought and the press. It should be the basic nature of a civilized people that they maintain friendly relations with and respect for others, even though they have different views.”

“Square rock or rounded boulder, each of them has its own use, and we should not rebuke those whose personalities are different from mine.”

“On leaders, heroes and choosing leaders, Dosan said the following:

“Do not use vanity as a basis for accepting a person as a leader. Rather, research his principles, his characters, his views and capabilities, and determine whether you agree with them. If you consider his attributes are more superior to yours and others, then you can recognize him as a good leader. Do not rely on hearsay or rumors that go around. Study carefully the record of his action.”

“A hero is nothing special. Anyone who works with an attitude of a hero can be called a hero. There are people who do their heroic deeds whether they get credit for them or not. We have these heroes among us. They quietly do their work for our countrymen, devoting their money, knowledge, time and passion despite all the interference they face. I see people like this. You must see them, too.”

In a speech to a group of young people, Dosan expressed his dream for Korea:

“There will be the time when our Taegeuk (Korean) flag will wave in cities across the globe. Our flag will represent absolute trust and superb quality. I must say we Koreans are in a shameful situation right now, but some day the word ‘Korean’ will be synonymous with virtue, wisdom and honor. It will be entirely up to our own efforts to achieve this great honor.”

“Let all of us study sincerity. Let all of our people make a strenuous effort to become a sincere nation. This is the only means of saving our country.”

SOURCES: “DOSAN: THE MAN AND HIS THOUGHT” BY AHN PYONG-UK, TAKEN FROM WWW.DOSAN.ORG; DOSAN’S WAY TO LEADERSHIP: LOVE YOURSELF, LOVE OTHERS BY SUH SANG-MOK AND AHN MOON-HYE, TRANSLATED BY JOHN CHA. 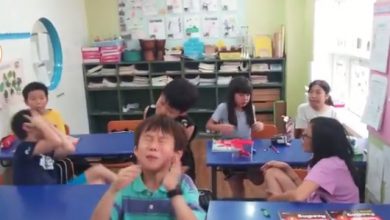 An English teacher in Korea thought he could make a fun video by introducing his students to Warheads, those disc-shaped candies sour enough to make your eyelids twitch and […]