This week, KoreAm joins other Asian American organizations in commemorating the hate crime killing of Vincent Chin. This story, marking the 30th anniversary of the landmark case in Asian American history, originally appeared in our July 2012 issue.

Asian American activists shine a light on a landmark hate crime that galvanized the community and holds lessons 30 years later.

June marked the 30th anniversary of the violent murder of Vincent Chin, perhaps the most well-known Asian American hate crime victim, and someone whose name and face would become a symbol of the first major pan-Asian American civil rights movement.

But despite being the “most well-known,” there are many Asian Americans who know nothing about Chin or the circumstances surrounding his 1982 killing by two white Detroit autoworkers. The fact that the killers, who heckled the Chinese American with racial slurs as they beat him to death with a baseball bat, served no jail time set off outrage among many Asian Americans at the time.

“If this really happened, why isn’t it a bigger deal? Why did I not know about it [earlier]?” asked Minhoon Sohn, a student at Hamilton College, recalling his initial reaction to a screening of the documentary Vincent Who? (2009), about the Chin case, last year at his New York campus.

Sohn’s questions point to the motivation behind recent efforts to bring the case back into the spotlight for today’s younger generation—efforts like the documentary, as well as the more recent June 23 Google Hangout event, Vincent Chin 30: Standing Up Then and Now.

The nationwide dialogue was streamed online, enabling people all over the world to view the multi-way video meeting. Viewing parties in more than 30 cities were organized, and participants were able to submit questions through Twitter.

“We’re trying to elevate the conversation on bullying, hazing—that all this hate still [happens] and is relevant, [that] there’s plenty of work that still needs to be done,” said Phil Yu, the blogger behind the popular Angry Asian Man website, several days before the Hangout, which he moderated. “We also want to utilize the technology at our disposal to really connect people across the country and get everyone in on this conversation.”

Yu first learned about the Chin murder as a college student in 1999 and said it compelled him to contemplate the deeper implications of identifying as an Asian American. “[It was] more than just being comfortable or confident with my culture,” he explained. “It challenged me to think about how race plays a part in the way we all interact with each other, whether we’re aware about it or not. Most importantly, it showed me that Asian Americans have a place in the fight for racial justice.”

For many, the Chin case illustrated how Asian Americans were and still are victims of racial discrimination and violence. It also showed many Asian Americans that hate crimes do not distinguish between Japanese, Chinese, Korean or any other Asian ethnic group, and that there is a need to unite across ethnicities.

After all, when Chin’s killers, Ronald Ebens and Michael Nitz, confronted him on June 19, 1982, at a Detroit strip club, where Chin was having his bachelor party, they thought he was Japanese. The disgruntled former autoworkers blamed the Japanese for the deteriorating U.S. auto industry and their unemployment. They instigated a brawl, and after being kicked out of the bar, Ebens and stepson Nitz looked for and found Chin, and beat him multiple times in the head with a baseball bat. He died after four days in a coma, leaving behind a devastated fiancée, a grief-stricken mother and an enraged community.

In 1983, the second injustice occurred, after Ebens and Nitz were convicted of second-degree manslaughter, and were able to go free with a sentence of three years of probation and a $3,780 fine.

“In the larger population of Detroit, there was actually a lot of sympathy for the two killers because many auto workers had gone through similar situations—being laid off, losing their homes,” said Curtis Chin (no relation to Vincent), writer and producer of the Vincent Who? documentary.

After the sentencing, a coalition of outraged Asian American groups led multiple protests and rallies demanding federal prosecution of Ebens and Nitz. A 1984 federal civil rights case resulted in a sentence of 25 years in prison for Ebens. However, he went free after posting bail; Nitz, meanwhile, was cleared of all charges. In a retrial three years later, Ebens was also declared not guilty of violating Chin’s civil rights.

Though justice was not served, the case led Asian American leaders to call for a national pan-Asian civil rights organization that would advocate for the community and monitor hate crimes. In 1991, the National Asian Pacific American Legal Consortium, now called the Asian American Justice Center, was founded to play those roles.

Curtis Chin, who is a board member of the nonprofit organization Asian Pacific Americans for Progress, said he was motivated to make his documentary in part, to showcase the incredible collective work of civil rights leaders and organizations.

“The fact that we have screened the film at over 250 colleges makes us feel good,” said Chin. “But there is definitely a lot more work that needs to be done for our community to achieve equality.”

Hate crimes against Asian Americans continue to occur, and there were two recent high-profile cases of military hazing that involved anti-Asian taunting and resulted in the suicides of U.S. Army Pvt. Danny Chen and U.S. Marine Lance Cpl. Harry Lew, both in 2011. The country’s lingering recession and the prevailing “rise of China” headlines also make the threat of anti-Asian hate crimes feel even more relevant.

“We don’t want another tragedy for people to be motivated again,” said Chin. “We want to be able to learn from the past in order to inspire people to prevent things like this from happening.”

Political activism among Asian Americans today seems both harder and easier, Chin noted. On one hand, people seem to be more cynical about political involvement; on the other, there are many resources that everyday citizens can take advantage of to mobilize.

“That’s really one thing that sets us apart from the activists who took hold of Vincent Chin’s case,” said Angry Asian Man’s Yu. “Wow, they did all that without the use of technology, and God bless them for taking that on to mobilize all those people. But now we have all these amazing tools at our disposal.”

The recent Google Hangout is an example of utilizing one of those tools. Across the country, the panelists talked about working together on future initiatives: to hold a national discourse on bullying and continue to build alliances among ethnicities.

Congresswoman Judy Chu (D-Calif.) brought up the Harry Lew Military Hazing Accountability and Prevention Act (named after her nephew), which was passed by the House in May. The provisions would track military hazing incidents, provide a statutory definition of hazing in the Uniform Code of Military Justice, and require the Department of Defense to develop a plan to address hazing in the armed services.

Zahra Billoo, executive director of the San Francisco chapter of the Council on American-Islamic Relations, has been involved in the post-9/11 fight for civil liberties of Muslim Americans. During the Hangout, she shared a quote that inspired her to fight for the Asian American community as a whole: “It’s sort of a natural reaction to stand up against injustice when you are the victim. But where you define courage is when you stand up when you are not the victim—when you stand up based on principles. When you know that xenophobia and targeting and racism are wrong.” 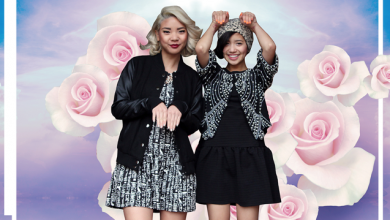 Story by Jeline Abutin.  We all know about couples wearing matching outfits, but what about cross-coordinating outfits with your BFF? Kastor & Pollux duo Bianca Venerayan and Dani Roche […]