Although social distancing and shelter-at-home ordinances have postponed her tour, Rina Sawayama is still releasing her debut album, “SAWAYAMA,” on April 17. Fans of the YouTube playlist “Rina TV” have watched the young Japanese British artist explain that she wants to keep things positive and about the music. Her album, which showcases her hard work, collaborations, skills and technique, is sure to please audiences who are currently stuck in their homes.

The album is a platform where Sawayama is able to express feelings about her pansexuality and concerns against xenophobia, as well as mash up her love for artists such as Britney Spears, the PussyCat Dolls and Miley Cyrus into a sound that is unique to her style. As an artist, Sawayama has dipped her toes into many different mediums. She models, sings, produces and runs “Rina TV.”

For the past several years as an out pansexual, the artist has devoted a lot of time to her lyrics on sexuality; to Sawayama they mean a lot more than just catchy words. Since self-releasing her first EP, “Rina,” in October 2017, Sawayama has worked with label Dirty Hit and included some of her hit songs such as, “STFU!,” “ Comme des Garçons (Like the Boys)” and “XS” in the new album, “SAWAYAMA.” After two years of dedication and help from producer Clarence Clarity, “SAWAYAMA” has been refined to exclude songs that do not fit its sound, making it a truly top-to-bottom experience and thematic journey.

“SAWAYAMA” begins with “Dynasty,” which didactically opens the conversation of the album to ask, who is Rina, where do we come from as people and why does any of this matter? The opening lyrics, “I’m losing myself/ in the darkness of the world” introduce listeners to a sadness that comes with recovery. Reminiscent of The Weeknd killing himself off in the “Starboy” music video and having a reawakening, Sawayama declares that she needs to save herself, and that she is a dynasty in herself. The album is poetic and beautiful in its powerful opening to not only women and the LGBTQ community, but to humans in general.

The album continues by utilizing technical aspects of rock and synth pop, as it moves to “XS,” which blasts off into an almost-homage to Britney Spears. Sexy, honest, dramatic and bold, it’s clear that a large portion of “SAWAYAMA” is experimental. Sawayama’s third song on the album, “STFU!,” is one of the album’s most experimental songs both production-wise and lyrically, as it deals with politics, gender and concepts of Orientalism. In these moments, lyricism matters. In her Q&A on “Rina TV,” Sawayama explains that her words are cutting deeper into comments about capitalism rather than merely being songs about opulence.

Overall, Swayama wants her album heard start to finish, including interludes to help listeners connect and transition from song to song. Audiences are struck by locatality and sensual memory as the songs traverse the visual and sensory landscapes of Tokyo and London. Songs like “Comme Des Garçons (Like The Boys)” tell a feminine story about recreating the mold and changing femininity to allow for code switching. “Like the boys, like the boys/ Comme des garcons/ I’m so confident,” Sawayama asserts over a bouncy pop melody. A thematically similar track, “Akasaka Sad,” uses variations in vocals to showcase this bouncing between genders roles and stereotypes.

As the album nears its finale, “Chosen Family” sees Sawayama reaching out to her audience, literally, and offering fans a moment where they can interpret her work even during shelter-at-home. Sawayama choses a queer family, opening up to those who have been ostracized for their sexuality. The pain the family experiences, mixed with the joy of finding a new home, is why the artist dedicates the song to those falling victim to prejudice.

Ending with the track “Snakeskin” suggests a metamorphosis. The song combines EDM sounds to literally vibrate, much like the rattle of a snake. With an album and a career that’s still young and fresh, it’s very mature of an artist to be asking for forgiveness in her ending song. Sawayama allows herself vulnerability, and is open to experiencing a gamut of emotions, pain and joy. Her work is not ruthless, but it does voice concerns and confrontation from an Asian queer woman, who uses her own voice as a platform for those who experience confusion and fear, especially during times like these. 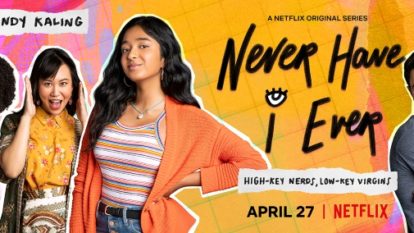 Sure, everyone’s enjoyed the “Tiger King” craze, but Mindy Kaling and Netflix have your next binge-worthy show lined up and ready for action. Meet “Never Have I Ever,” debuting […]