It seems as if we have another reason to scream for ice cream.

Chef Roy Choi and Portland-based ice cream company Salt & Straw have teamed up to bring forth a new flavor, and if you know anything about both of them, they know a thing or two about coming out of left field.

Papi’s Korean Fluffernutter joins an already delectable medley of flavors at Salt & Straw. It draws inspiration from the Korean spiced peanuts Choi ate as a child, and his reimagining sounds amazing. The peanut ice cream base is mixed with marshmallow fluff and blackberry jelly, infused with Thai spices and nut chunks, according to food blog Roaming Hunger.

The ice cream shop will also be serving a molé rojo flan flavor from Guelaguetza, a bratwursts and mustard flavor from Wurstkuche and a Peking duck flavor that Salt & Staw concocted.

The new flavors are a part of a street food series and will be available from this Friday, June 5, through July 2 at Salt & Straw’s Larchmont Boulevard location in Los Angeles.

We know what we’re doing this summer.

“Give Me Ice Cream or Give Me Death”

“7 Unique Beers You Can Order in Seoul” 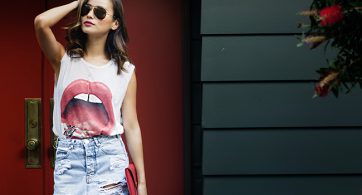 Not sure about some of the more ornate summer fashion trends and ’70s throwbacks we’ve been seeing on the runway?  Here’s a way to feel on-trend for summer without […]