July is about to get even hotter here in Southern California.

The “Crown Prince of Ballads” Jo Sung Mo will be performing July 26 and 27 at Pechanga Casino, along with traditional Korean musician Song So Hee. Jo Sung Mo rose to fame after releasing his debut album, “To Heaven,” in 1998, and since then he’s dropped jam after jam for millions of fans, even setting a record in Korea with over 1.6 million album sales. Song So Hee, a performer of traditional Korean music known as gugak, became the youngest grand prize winner of the singing competition show “KBS Singing” at age 11. Now 21, the singer has performed around the world, including at the closing ceremony of the 2014 Sochi Paralympics.

The collaboration between the two artists has been eagerly awaited, and the two shows at the Pechanga Theater are sure to be thrilling performances. You can buy tickets here. 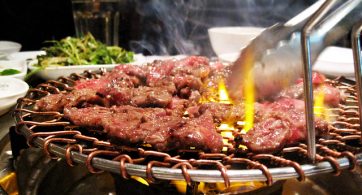 Sorry, vegans. Since the start, Asian cultures have been out here roasting like a Comedy Central special. Of course, dishes like brisket, bulgogi and peking duck are classic, but […]