The island-continent-country is now home to a vibrant Korean population—a far cry from its “White Australia Policy,” which persisted as late as 1973.

Australia was a different country in 1974, as Jackson Choi recalled.

“Driving from the airport, the taxi driver thought I was Japanese,” said Choi. “I’m not sure that people even knew what Korea was.”

These days many foreigners are shocked for the exact opposite reason when they arrive Down Under. Visitors find cities that are clearly multicultural, defying the stereotypical Australian image of the crocodile hunter and the bikini babe.

Walking the streets of Sydney can remind you of Singapore or San Francisco. The current telephone directory lists the most popular surnames in that city as Smith, Lee, Nguyen, Chen and Kim. In the second largest city of Melbourne, Nguyen and Singh make the top five.

Australia does not have the long history of multiculturalism that the United States or the United Kingdom has. In fact, the “White Australia Policy” institutionally persisted as late as 1973. However, its geographical proximity to Asia and a conscious governmental push for diversity has seen the English-speaking country become a popular destination for Asian immigrants and students in the last 30 years.

Contributing to this now cosmopolitan Australia is a vibrant populace of Korean émigrés and their descendants.  In the 2006 census the number of respondents of Korean background was over 150,000 in a country of just over 20 million people. In addition, the South Korean government reports over 3,000 adoptees have been sent to Australia since 1969.

Campsie represents the original center of the Korean diaspora in Sydney.

After World War II, Australia’s economic strategy shifted from North America and Europe to East Asia. According to 2010 Australian government statistics, China, Japan and South Korea are among the country’s top four trading partners. However, at a societal level the transition from a Europe/North America focus to Asia has been a rocky road.

With the White Australia Policy having been fully dismantled only a generation ago, the first wave of immigrants from Asia landed in the 1970s.  (There were minor exceptions to the policy before this, such as Chinese immigrants arriving during the gold rush in the 19th century before Australia became a nation, and Japanese pearl divers in Western Australia. However, the numbers were very small.) Like the Southern Europeans who immigrated during and after World War II, the early Asian arrivals faced tremendous obstacles in a society not yet used to diversity.

Jackson Choi, one of the first Korean arrivals, remembers touching down in Sydney as a young man in July of 1974. “I think there were less than 100 Koreans in the country when I arrived. Coming from a poor Korea, I remember being dazzled by all the bright lights in Sydney,” he said.

While Koreatown was being christened in Los Angeles, in the 1974 version of Sydney, seeking comforts from the motherland was a struggle.  “There were no Korean shops or restaurants.  We found a small Chinese grocery store in Haymarket that sold chili sauce, and that was the closest thing we could find to gochujang,” said Choi.

“Chinese cabbage was nowhere to be found, so we had to improvise with Western vegetables to makekimchi,” he added, chuckling.

Choi’s new country in the 1970s seemed an innocent, almost naive, place. “The police didn’t carry guns because the crime rate was so low. And they were so friendly [that], if you asked for directions, they would give you a lift to your destination!”

Arrivals from South Korea accelerated during the 1980s when skilled migration opened up. By this time Australia was getting used to its new identity as a multicultural society, although hurdles still had to be overcome.  John Howard, then an opposition leader in the federal Parliament and later Prime Minister, infamously proposed an end to multiculturalism in 1988 and a slowing of Asian immigration.  Political and business leaders swiftly condemned Howard’s comments and the proposal. However, there was an uneasy undercurrent that Howard merely reflected the sentiments of many of the “old” Australians.

Korean Australian Elizabeth Kim-Anandarajah says life was tough after her family landed in 1984. She was 5 at the time. “Memories are of hardship,” she said. “Trying to fit into a new country, learning the language, system and culture. Mum was lucky to land a job as a librarian fairly quickly, but that caused tension with Dad, as he didn’t want her working. When I think back on it, it mostly brings back feelings of unhappiness and insecurity.”

Ironically, by the time Howard was leading the country as Prime Minister 15 years later, Australia had changed irreversibly—the very electorate he represented now had a large proportion of Asian Australian voters.  His successor as Prime Minister, Kevin Rudd, even spoke fluent Mandarin, much to the fascination of Chinese diplomats.

Today, South Korean businesses and residents can be found all over the two biggest cities of Sydney and Melbourne, with pockets of diaspora in other state capitals. Australia is also a popular destination for temporary visitors from Korea, such as backpackers and English-language students.

Scores of adventurous Korean itinerants can be found working in the hotels and restaurants for traveling money in the scorching desert heat at Uluru, one of the nation’s most popular tourist destinations. Similarly, budget travelers are also found seasonally at farms all over the country as fruit pickers, working for cash to continue their backpacking. The most famous Korean traveler Down Under was the Olympic gold medalist swimmer Park Tae-hwan, who spent a year training in Australia before the 2008 Beijing Games.

Korean Australian children, like their North American counterparts, tend to grow up well integrated into mainstream society. Second-generation Korean Australians have contributed to the Australian zeitgeist, such as the actress/singer Sun Park. Politically there have been Korean Australians elected at the local government level. “I’m very proud of the achievements of the younger generations of Koreans in Australia,” declared trailblazing immigrant Choi. “With no language or financial barriers, they do just as well as anyone else.”

Notwithstanding the successes of the second generation, one general criticism of the immigrant Korean Australian community is its insularity.

Councillor Keith Kwon is a former mayor and a current member of local government at Strathfield, an area of Sydney with a substantial Korean presence. He expressed his concerns about the introversion. “As the Korean community has established enclaves in different parts in Sydney, Melbourne and Brisbane, they tend to be inward-looking, though this is understandable given the language barrier,” he said.  Kwon feels the current structure of the Korean Australian community is an impediment. “There are no leadership groups which are competent in dealing with mainstream society, and most members of the Korean community are too preoccupied with church activities,” he said.

“Korean Australians work hard and are very entrepreneurial, but I don’t think we assimilate as well as we should,” said Kim-Anandarajah.  She compares Korean Australians and Korean Americans to illustrate this point. “In part, I think that’s due to the Australian culture in that it doesn’t have as strong a national identity as the U.S.A., and it doesn’t enforce it. When I meet Korean Americans, they’re very much ‘Americanized,’ whereas the Korean Australians I meet are still very much Korean. I think now that the second generation are coming into adulthood, we’re a little bit more assimilated, but we have long way to go.”

There is a noticeable lack of a dominant “K-town” in Australia.  However, in Sydney, areas such as Strathfield, Eastwood and Campsie all have visibly obvious concentrations of Korean businesses and residents.

Strathfield is popular with the transitory Korean student population. Restaurants, cafes, karaoke joints and even Korean street food, all geared towards a younger crowd, can be found here, just a 15-minute train ride from downtown. The cashed-up students’ appetite for dining and entertainment has led to Strathfield having the highest concentration of Korean food businesses in Australia, with 49 such outlets, according to the Sydney Morning Herald.

Strathfield holds the highest number of Korean businesses with 49. (Photo by Derek Fung)

Campsie, a grimy, working-class area in the inner southwest, was the original functional center of the Korean diaspora in Sydney. A generation ago, if one needed anything Korean — imported groceries, a tasty bowl of jjajangmyeon, electrical appliances, afterschool tuition, Korean-speaking doctor or lawyer — Campsie was the place to visit. With the growth and spread of Korean Australians, the suburb no longer holds the importance to the community it once did, but is of historic significance.

Eastwood lies in the affluent and leafy northern district of Sydney and has taken over from Campsie as the locale of choice for permanent residents of Korean heritage. A north-south railway divides Eastwood in half, with the western side displaying a heavy Chinese influence, while Korean businesses and residents dominate the eastern side. As a visitor wanting to sample the Korean Australian experience, this is the place to come to in Sydney.

Kim-Anandarajah’s uncle opened the first Korean shop on its street in Eastwood. It began as a tiny hole-inthe-wall grocer, but is now the largest shop in the neighborhood; these days surrounded by numerous other Korean stores. “I didn’t know it at the time, but they worked incredibly hard with that tiny store,” Kim-Anandarajah said of the early years. “My aunt would regularly collapse from exhaustion.”

Eastwood is in the heart of the electorate that former Prime Minister Howard once represented. Despite his concerns, in the space of just one generation a homogenous nation has transformed into something special: a cultural and physical intersection of the west and the east. The crocodile hunters and the bikini babes are still here, but who knows what ethnicity they are these days.

This article was published in the September 2012 issue of KoreAm. Subscribe today! To purchase a single issue copy of the September issue, click the “Buy Now” button below. 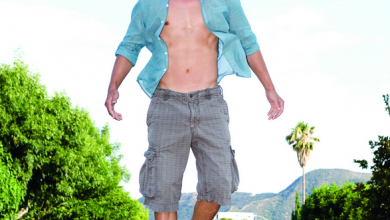 All the Right Moves Hollywood stuntman Ilram Choi likes to defy the laws of physics. In his latest project, he gets to do just that while donning the Spider-Man outfit. story by CHELSEA […]