Chances are that when people describe the early-2000s drama series “The L Word,” they call it a “lesbian show” (after all, what else could that L stand for?). So, you might wonder, what does a transgender male character have to do with it?

“There’s a few new faces,” Leo Sheng, a trans man who stars in the reboot “The L Word: Generation Q,” shared in a Spotlight interview. “We call it ‘Generation Q’ because we’re expanding on what it means to be a queer person, and it’s a look at contemporary queer life in L.A. now.”

Sheng got his start in acting at 21 years old with the 2019 Sundance flick “Adam.” Now, he plays the role of Micah Lee on “Generation Q,” a sequel series from Showtime that picks up a decade after the original’s run from 2004 to 2009. Like its predecessor, “Generation Q” does focus mostly on the tales of queer women living in L.A., but characters like Micah expand the series’ scope.

Although the first run of “The L Word” did feature a trans male character, Max Sweeney, the transgender community has since denounced his portrayal. Not only did Max’s character incorporate numerous harmful stereotypes about life as a trans person, other characters frequently made degrading comments about his masculinity, particularly during a pregnancy arc in the series’ final season. “I’m a trans guy playing a trans guy, and we have so many similar experiences,” Sheng said. “So, it’s nice to see some of that reflected in the storytelling, showing that trans men are men. We do want to address the ways in which Max felt hurtful to trans men and transmasculine communities through this new representation of Micah.”

He’s representing those communities off the screen, too. Sheng documents his transition and life via social media (you can find him @ileosheng), providing a role model for trans folks who might not see themselves represented by other transgender content creators. “I socially transitioned when I was 12. That was the height of this YouTube generation of trans men … but it was predominantly white trans men,” Sheng said. “Over the years, my platform has grown to be an expression of my own transition, my own experiences, as a queer person as an adoptee, as a Chinese American person. It feels important to be honest and open about myself in a way that I needed when I was 12 and 13.”

Watch our full interview with Sheng above, then make sure to catch up on “The L Word: Generation Q!” 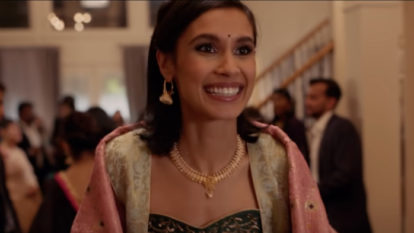 The film, which hits theaters today, explores the secrets that polished, upper-class Indian American families keep under lock and key.