On Sunday, world-renowned cellist Yo-Yo Ma and his Silk Road Ensemble won a Grammy in the “Best World Music Album” category for “Sing Me Home,” an album which united global talents to celebrate the collaboration of diverse artists. What many viewers did not know, however, was that one of the Ensemble’s members, Syrian clarinetist Kinan Azmeh, had been stranded overseas by President Donald Trump’s travel ban only weeks earlier.

Das then reflected on the travel ban’s significance to many of the Ensemble’s members, including Azmeh. “When things like this happen, it impacts us directly because a lot of us come from a lot of those countries,” Das told reporters.

An esteemed musician, the Damascus-born Azmeh is a Juilliard graduate who has made appearances worldwide. He was permitted to immigrate to the United States based on his talent and has legally resided in the country for 16 years.

However, when Trump passed his executive order on Jan. 27 banning citizens from Syria and six other Muslim-majority nations from entering the U.S., Azmeh was barred from returning to the country, regardless of the green card that he had obtained three years prior. Stranded in Beirut, he lamented the friends that he had left behind in the U.S.

“I have my apartment. You know, 16 years is not a short time, you accumulate lots of stuff,” Azmeh said to the Associated Press. “But what is not replaceable is all the friends who are incredibly supportive.”

After the court blocked Trump’s order, Azmeh returned to the U.S. There, he participated in the Seattle Symphony’s concert “Music Beyond Borders: Voices from the Seven,” in which artists of various nationalities performed music originating from the blacklisted countries.

Azmeh discussed being disturbed by the implications of Trump’s travel ban with Rolling Stone, drawing comparisons to his fear of speaking Arabic in public following the Sept. 11 attacks.

“What does this mean for everybody in the world who is discriminated against, just because they have a different skin color, a different passport, different religious beliefs?” Azmeh said. “That’s the question everybody is asking.” 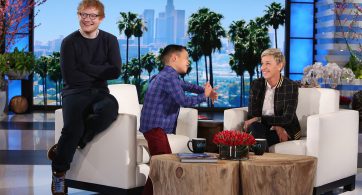