Do you like to watch cooking channels and cooking videos on YouTube? I am especially guilty of this, often binge watching talented cooks create beautiful dishes that leave me imagining how delicious everything tastes and smells. Thankfully, along the way I’ve picked up quite a few tips and tricks from these online mentors and I’m always looking for more experts to follow. If you’re also looking for cooking inspiration, we have just the thing.

Three years ago, Tastemade, a venture-backed startup in Santa Monica, California, turned to the Internet to broadcast its own original content about the culinary art of food and drink. Now with more than 25 million visitors a month, Tastemade is jumpstarting its Chinese-language programming, featuring popular Taiwanese food blogger Katie Hsieh as its host.

Hsieh joins more than 1,000 food enthusiasts known as “tastemakers,” at Tastemade to create food programming content tailored to global audiences. Many of them started on YouTube and gained success and popularity over time. Hsieh’s debut video, which aired July 1, is in Mandarin and teaches viewers how to make a popular Taiwanese snack called guabao or steamed pork sliders.

The 36-year-old housewife has a degree in engineering but found a career in the culinary arts. Hsieh started her blog in 2011 to share recipes, cooking tips and techniques with her readers, many of them fellow mothers. With two young daughters of her own, she specializes in creating dishes that are simple but delicious. In fact, the recipes that Hsieh has written on her blog and in cookbooks can often be made in one pot and aren’t too time-consuming.

Because of her talent and skill, many have affectionately dubbed her as the “Taiwanese Rachael Ray.” Her response? “I say I want to be the Asian Martha Stewart,” Hsieh jokes. 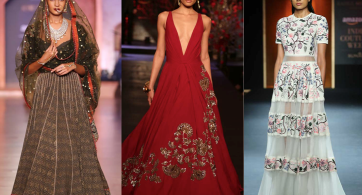 While everyone is prepping for the upcoming major four city Fashion Weeks, the Fashion Design Council of India along with Amazon.in (Amazon.com) presented a series of shows exhibiting […]