Pictured above: The team behind RushOrder, led by CEO Eric Kim, standing at right. (Photo by Narith Ta)

From trendy cafes and late night galbi houses to the family-owned liquor and convenience stores and slew of professional offices offering banking, medical or legal services, the spirit of entrepreneurship is palpable on every boulevard and street corner in Koreatown, Los Angeles.

One not-so-obvious indicator, however, is the growing wave of tech startups led by a new generation of Korean American entrepreneurs. Within L.A.’s dynamic startup scene, this subset is forming a regional tech-trinity that includes Silicon Valley and Seoul. And here, Koreans on both sides of the Pacific have come to find themselves in the middle of the action.

A view of the Kolabs office space. (Photo by Narith Ta)

One current draw may be Kolabs, a shared workspace and business incubator-accelerator aimed toward nurturing the growth of South Korean and Korean American startups. Opened in March by L.A.-based venture capital firms Strong Ventures and BAM Ventures, the facility is home to RushOrder, a food delivery app that’s cornering the Koreatown restaurant market; 8/Omakase, a made-to-measure online clothing service for style-conscious men; and SnackFever, an online delivery service dispatching packages of tasty Korean snacks; plus other companies expected to join this summer.

The idea for such a facility sprung after Richard Jun, BAM Ventures’ cofounder, reached out late last year to John Nahm, co-founder and managing director at Strong Ventures, about opening a “cool, co-working space” in Koreatown. Its name is derived from an amalgamation of “Korea,” “L.A.,” “BAM” and “Strong,” and, according to Nahm, is also shorthand for “collaboration laboratories.”

“Where things get cooked,” Nahm quips, from Kolabs’ office, located across the street from the trendy Line Hotel in Mid-Wilshire Koreatown. Nahm and Jun, who have backgrounds in corporate finance, are looking to invest not only their capital but provide young entrepreneurs guidance in an open environment.

“This is the second or third wave of entrepreneurship,” says Nahm, referring to Korean Americans. “The first immigrants were the ones who really struggled, opening markets, liquor stores, dry cleaners … all kinds of hard labor. The second wave is the lawyers, doctors—all […] reaping from their parents’ labor.

“The second generation was a bit more stability seeking; the third wave is more entrepreneurial—back to sort of what their parents did, but with new media and technology,” he adds.

“This is the second or third wave of entrepreneurship,” says Nahm. (Photo by Narith Ta)

The first thing visitors notice about Kolabs’ nearly 5,000 square-foot space is the lack of walls, as the individual companies don’t have separate offices. They share the entire suite, including the conference area, media studio and lounge commons (complete with a ping pong table), all within working and shouting distance of one another.

While Kolabs is still in its infancy, it shares a similar mission and spirit with other incubators: to provide an open space for startups to break into the ultra-competitive tech industry—but with an emphasis on Korean and Korean American entrepreneurs, in the most developed and concerted effort of its kind outside Korea.

The ability to solicit ideas and exchange ideas has been a valuable asset of Kolabs, says Eric Kim, CEO of RushOrder. The young entrepreneur points to his relationship with Yang, who isn’t formally affiliated with the facility but is using the space as an office while exploring options for his next project.

“His reputation precedes him,” Kim says, of Yang, whose first startup, an e-commerce price comparison shopping website called mySimon, was acquired by CNET for $700 million just two years after launching in 1998. “He’s a serious player in the startup world, and the ability to bounce ideas off him is great. I could just go over and talk to him, and sometimes he’ll just come to us.”

A view of the Kolabs office space from the lounge area. (Photo by Narith Ta)

This fluid workspace culture is evident from employees’ willingness to trade tips—or just lighthearted moments. At one point during KoreAm’s visit, 8/Omakase co-founder Elbert Song chatted with the staff of SnackFever about shipping options he uses.

“Unless you’re super lucky and your startup is on fire right out of the gate and you have 10, 20 people working with you, one of the things you lose is that camaraderie of an office space,” Song says. “There has to be interaction. There has to be that banter, … water cooler talk. All that stuff is super important.

“For most of us, [we] may be pretty talented, but you have to be put in the right environment in order to succeed,” he adds.

The Kolabs environment takes cues and lessons from both Korean and Western business culture—in particular, the close sense of community and ‘family feeling’ among co-workers. The hierarchical chaebol corporate culture, though, is replaced by one that’s very horizontal.

“It’s very informal, everybody is young and the youngest guy’s opinion is heard,” Nahm describes. “Whereas in traditional Korean corporations, the young guy just has to shut up and do whatever the manager says. In that regard, generationally, it’s very different—horizontal, open and fluid. We move fast.”

For South Korean startups, it doesn’t hurt to have the Korean government pouring money into the country’s flourishing tech startup scene. The companies that become successful enough to cast their gaze globally will eye Silicon Valley, according to Nahm. But they often come away discouraged by how competitive it is, he says.

“The venture capitalists and tech players, they’ll be telling Korean companies, ‘Stop coming,’ Nahm says. “‘[If] you come here, you’ll just get decimated. Just do well in Korea,’ they say. ‘If you want to go global, maybe think of China, Southeast Asia.’”

The attitude is different in Los Angeles, whose Koreatown base provides an automatic sense of familiarity and cultural support, according to Nahm. “Even among the non-tech community, they’re behind [Korean entrepreneurs] because they want to see our own succeeding and prospering,” he says. “I think that support is even stronger here than in Korea.”

“They come here to L.A. [where they hear] a lot of success stories,” Nahm adds, of these entrepreneurs. “So the atmosphere [they expect] is, ‘Come here, we’ll support you and try to help. Even if we fail, let’s at least try together.’”

This article was published in the June/July 2015 issue of KoreAm. Subscribetoday! To purchase a single issue copy of the June/July issue, click the “Buy Now” button below. (U.S. customers only. Expect delivery in 5-7 business days). 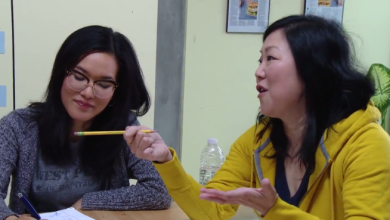 Story by James S. Kim  Margaret Cho isn’t one to shy away from conversations on any topic. If anything, she hits them straight on. In a new satirical […]