In case you haven’t heard yet, K-pop boy band BTS completely took over the American Music Awards on Sunday night. The seven-member band — who generated buzz even prior to the event in a brief “Jimmy Kimmel Live!” prank — performed their latest hit, “DNA,” for American audiences for the first time inside the Microsoft Theater in Los Angeles. And it wasn’t just ARMY, which is what BTS’ massive fan base call themselves, who were impressed by the band.


The night kicked off with Rachel Platten sitting on Rap Monster’s lap:

Giving my boys @bts.bighitofficial a pep talk before their first American TV performance. You guys are going to kill it! #amas #BTSxAMAs

Jackson (from K-pop band Got7) came to say hello:

Niall Horan, formerly of One Direction, had advice for BTS:

“Keep your head on your shoulders and don’t let it get away from you,” he told Billboard. “And make it last as long as you can. I’m looking forward to what they do in the States.”

Happy I got to meet @BTS_twt pic.twitter.com/5uifOPCDJP

Meanwhile, 20 million tweets about the band blew up Twitter during the event:

Rap Monster summed it up nicely via the group’s official Twitter after the awards: 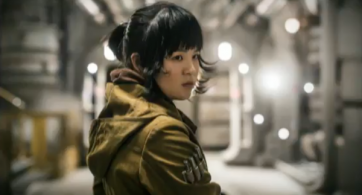 Kelly Marie Tran’s Rose Tico, one of the most anticipated additions to the Star Wars universe, is still a bit of a mystery, but we do have a little more information […]