This is a show that is equal parts Hollywood, “American Idol,” mystery and fever dream. And it just might be America’s new favorite guessing game. “The Masked Singer” is Fox’s newest reality singing show based off of the wildly popular Korean TV series “King of Masked Singer.” Over the course of one season, 12 celebrities will compete in one-to-one karaoke face-offs with one another while wearing outrageous disguises designed by Marina Toybina. The celebrity contestants also use voice synthesizers to further obscure their identities. After the performance, judges are each allowed to ask one question to help them guess the masked entertainer’s identity, which is only revealed upon elimination. Nick Cannon hosts the show while Jenny McCarthy, Nicole Scherzinger, Robin Thicke and Ken Jeong serve as judges. Antonio Brown of the Pittsburgh Steelers, disguised as the hippo, was eliminated in the first week. Last night, Tommy Chong, of “Cheech and Chong,” was revealed as the man behind a very chill pineapple mask, to everyone’s surprise. The show has been making waves across the internet with wild speculations and reaction gifs aplenty. Here are some Twitter reactions:

I was Masked Singer long before this Alien landed  #themaskedsinger https://t.co/rp48U2UxrU

The Masked Singer definitely feels like the show that would be on in the background in a movie about the world falling apart.

Maybe Kevin Hart can’t host the Oscars because he’s one of the The Masked Singers — Ira (@ira) January 10, 2019 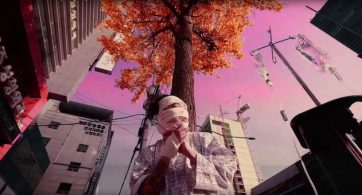 Never one to be afraid of change, it seems like “Pink Bleu Dawn” is a sign that “Dummie” is taking things in a new direction. Dumbfoundead first broke into […]