In the mood for a bloody critique of capitalism? Or is a heartwarming ode to teachers more your speed? Whatever you’re looking for, television has it—and the Emmys are here to recognize the best shows that kept audiences in front of their flatscreens this past year.

On Monday, Sept. 12, the Academy of Television Arts & Sciences (ATAS) gathered to award the various actors, directors and series that have made an impact on the small screen this year and caught the attention of viewers everywhere. The Asian and Pacific community was not forgotten either, with multiple API talents being nominated in various categories. But of course, as with every ceremony, there were just as many losses this year.

Without further ado, let’s get to the big snubs of the night. (Note: These are all the opinions of this slightly bitter writer; all winners deserved their trophies.)

Listen, I love Zendaya as much as anyone, and I was among the many suffering from “Euphoria” brain rot during the early months of this year. But Sandra Oh is an undeniably amazing actress, and her role as Eve Polastri in “Killing Eve” is one of my favorites in her career. After 13 Emmy nominations overall, it would have been great to see her finally win an Emmy for Lead Actress.

Patel has been on my radar since starring in the 2019 romantic comedy “Yesterday,” and since then his star has been slowly rising. But his performance on “Station Eleven” as the timid, yet compassionate Jeevan Chaudhary was a standout among the nominations. Not many actors could pull off Jeevan’s multifaceted personality, or handle the bittersweet relationship between his character and the orphaned Kirsten, but Patel effortlessly brought these complex emotions to life. It was a shame he didn’t win the award, but hopefully, he’ll see more nominations soon!

Alright, if we’re being blunt, there’s no doubt “Squid Game” has already received some well-deserved international acclaim, but this still marks a huge blindspot. Aside from Lee Jung-jae, much of the series’ supporting cast still haven’t been given the recognition they deserve. Park Hae-soo stole his every scene as the cunning Cho Sang-woo, perfectly encapsulating the morally gray aspects of his character. Meanwhile, Oh Yeong-su’s twist-filled portrayal of Oh Il-nam was one of the biggest surprises of the whole series. Both actors gave stellar performances and deserved a win in this category.

This is Mohammed’s second time being nominated for his “Ted Lasso” role, and in the show’s newest season, his character Nathan “Nate” Shelley went through a dynamic fall from grace. Mohammed’s performance adapted perfectly to Nate’s evolution and kept viewers on their toes. It makes his loss this year all the more disappointing, as Mohammed was a central part of what made this season especially exciting for audiences.

Try to think of one “Saturday Night Live” video from the last decade without Bowen Yang. This past year alone, his comedic chops have been evident in skits like “Bug Assembly,” where he played a precocious child dressed as a daddy long legs spider, and last November’s sketch with Simu Liu, which was the highlight of that episode of “Saturday Night Live.”

For me, the biggest snub of the night was a series that wasn’t even nominated for any categories: Apple TV+’s “Pachinko.” This oversight seems mind boggling, as the series has received praise from critics and viewers alike and currently sits at 97% on Rotten Tomatoes. The masterful directing of directors Kogonada and Justin Chon and the sweeping storyline brought to life by the many talented cast members, including Oscar winner Youn Yuh Jung and newcomers Minha Kim and Steve Noh, easily deserved at least one or two nominations. It’s sad to see the Academy ignore a series that propped up API storytelling and talent, especially one that has shared such important messages about the complex nature of family and culture.

Okay, enough gloom, because there were some historic wins for the API community on Monday night. “Squid Game” received 14 nominations at the awards ceremony,  and the giant doll from the show’s first episode even made an appearance with Hoyeon Jung and Lee as they presented the award winner for the Variety Sketch Series category.  Lee won Outstanding Lead Actor in a Drama Series for his portrayal of Gihun, and became the first Asian in a non-English work to win in this category. Earlier that evening, director Hwang Dong-hyuk received the award for Outstanding Directing for a Drama Series, mentioning during his acceptance speech that he hopes “Squid Game” won’t be the last non-English winner of this award. Hopefully, he’s right. Who could imagine even a few years ago that a series made completely in Korean, for Korean audiences, would gain such acclaim and popularity across the globe? With the success of “Parasite,” “Minari” and now “Squid Game,” Hollywood seems to finally, if slowly, be opening up to API talent and stories. 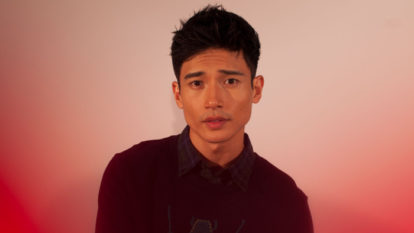 Jacinto will star alongside Emmy winner Lee Jung-jae in the Disney+ series.