The official Unforgettable 2014 website is finally here! For updates on performers, award recipients, celebs and all the information you need, click here.

We are pleased to present Audrey Magazine & KoreAm Journal’s 13th annual gala, Unforgettable. This high profile, celebrity-studded event is dedicated to honoring achievements within the past year and is an opportunity for talent to perform for distinguished and influential members of the community.

Sponsored by Royal Salute and presented by Duracoat, this year’s gala will honor and award four Asian Americans individuals for their outstanding achievements and contributions in the field of arts and entertainment. The award recipients include: John Cho (ABC’s Selfie, FOX’s Sleepy Hollow) – Royal Salute’s Mark of Respect Award and The Actor of the Year Award; Ming-Na Wen (ABC’s Marvel’s Agents of S.H.I.E.L.D.) – The Actress of the Year Award; Ki Hong Lee (20th Century Fox film The Maze Runner) – The Male Breakout Star of the Year; Arden Cho (MTV’s Teen Wolf) – The Female Breakout Star of the Year.

Yoon Mi Rae, Korean American hip-hop and R&B royalty, returns this year to perform her No. 1 hit song in Korea. Other featured artists include K-Pop artist G.NA, winner of The Voice Tessanne Chin, beatbox champion KRNFX, along with collaboration performances from singer/songwriters Arden Cho and David Choi, and exciting dance performances by Mike Song and KINJAZ.

In addition to the award recipients and performers, global stars Lisa Ling (CNN’s This is Life with Lisa Ling host), Han Ji-min (TV Drama Rooftop Prince) and Koo Soo (Film Way Back Home) are among the confirmed list of high-profile celebrities attending the gala this year.

The event will take place at the legendary Park Plaza Hotel on Friday, December 5, 2014. An after party will immediately follow the black-tie event providing another chance to celebrate the year with celebrities and VIP guests at Feria. 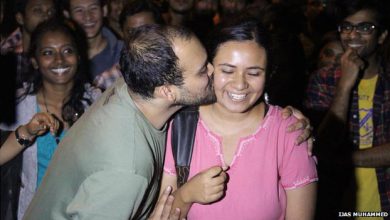 When I see couples give each other a quick kiss in public, I really don’t think twice about it. After all, growing up in American means movies, television […]