Our friends at Giant Robot take a behind-the-scenes look at Hawaii 5-0.

Television has such a fast moving pace that the director can’t scrutinize every moment of every word. There’s trust between the sound, multiple camera angles, and how the lines are delivered. Daniel answers, “the intonations can change per take.” He cites that it’s often his own discretion, and they’ll pick one of them. Even the hmmms, yeahs, and extra unscripted sounds that the actors make might get edited out, but are used to keep in rhythm of the scene. There are plenty of lines to memorize in a scene like this, and while some actors can memorize them after reading them once, the director cites Kiefer Sutherland as one who memorizes them instantly. Grace Park reveals that she works on them days early. Two days early is her technique for success. Then she goes over it again and again. Daniel Dae Kim who started off with a Law and Order Episode said that some of the old pros on that show read the lines right before the take for the first time, and fired them off perfectly.

When asked whether or not she and her coach have been working on material together, Frampton answered with an enthusiastic “Yes!” before going into more detail.

“I wrote a song with some friends (who also knew Blake) in Nashville. The song is called ‘I Will,’ and when I sent it to Blake he said he’d love to sing on it,” she revealed. “He took time out of his busy schedule to come record his part, which meant a lot to me. He’s been so supportive through all of this. He’s working overtime as a coach.”

There’s a musical mutiny playing out in this city’s hallowed concert hall, a discordant note not usually heard from the nation’s premier symphony orchestra.

Musicians in crucial chairs of the KBS Symphony Orchestra have either walked out or been dismissed, taking their instruments with them. Others are donning protest T-shirts and offering subpar work during practices and even some performances.

Such sourness stems not only from hard financial times and a trend toward declining salaries but the reappointment of an unpopular American-trained conductor. Many veteran musicians with the 55-year-old symphony orchestra are irate about controversial conductor Hahm Shinik, who many say can’t tell an oboe from a French horn.

“During rehearsals when the tune is off, the conductor doesn’t know,” one musician told the JoongAng Daily newspaper here. “Furthermore, he doesn’t recognize the distinction between different instruments.”

At rallies, the musicians have chanted: “We don’t want a circus. Make the unskilled conductor step down.”

The impact of Michelle Rhee’s ‘culture of urgency’
Washington Post

It is an almost universal tribute offered about Michelle Rhee’s 3 1/2 -year tenure of the Washington D.C. school district — that if she accomplished one thing, it was to instill a sense of urgency in the city about the need to fix broken schools that had failed children for decades.

The cries of a newborn girl abandoned in a grocery bag at a Schaumburg church led congregation members to discover her tucked under a teddy bear and a bath towel. But her rescuers think there was something more that helped them find the baby as the Gospel Presbyterian Church emptied after Sunday services.

“I definitely feel God was working in this situation,” said Bob Song, a church elder who helped find the 5-pound, 9-ounce girl. If no one had heard the newborn crying Sunday from inside the green, recyclable grocery sack, she might not have been discovered for two days because the church is typically closed and empty on Monday.

“That would have been too late,” Song said, worrying that the baby could have died by then. “I felt so good that God let people hear the baby crying.”

The article also noted that the baby was Asian.

Be the first person to figure out where Debbie Lee is opening the brick-and-mortar location of Ahn Joo Snack Bar (already rolling around LA as a food truck since last year), and you could win a $100 gift certificate to the place. The Korean pub grub concept officially opens on November 10th. We keep hearing it’s in Hollywood, but what do we know?

The first person to correctly reveal the “secret” location of Ahn Joo Snack Bar by snapping a picture of it and tagging it @AhnJooLA on Twitter, will receive a $100 gift certificate, as well as an invitation to the restaurant’s opening celebration.

North Korean leader Kim Jong-il is the only “old-school” dictator in the world now that Libya’s Moammar Gadhafi is dead, wrote William Dobson, a former editor of Foreign Policy magazine and Newsweek, in the Washington Post on Sunday.

Dobson classified dictators into “20th-century old-school dictators” and “21st-century dictators.” “So-called 21st century dictators have realized the high cost of pure dictatorship so they repress their populations indirectly through legality, procedure and process instead of iron-fisted control,” he said.

In September, under the flags of North Korea and China, North Korean workers began digging at Haesan, a hilly town near the Chinese border, kicking off one of several joint mining ventures. On Oct. 13, a Russian train chugged across the border to celebrate the restoration of a dilapidated Soviet-era rail link between the Russian city of Khasan and the North Korean town of Rajin.

At Haesan, China acquires copper, one of the many abundant mineral reserves lying next door waiting to be exploited. At Rajin, Russia wins access to an ice-free port to export Siberian coal and take in Asian goods it wants to transport to Europe. From both projects, the North Korean leader, Kim Jong-il, counts cash.

These and other similar deals North Korea is striking with its two Cold War-era allies, especially China, are creating a predicament for the South Korean government.

One of the earliest people to foresee the potential of the [downtown L.A.] Arts District was restaurateur Jason Ha, who restored a historic building into an Asian-fusion sushi restaurant in 2002.

Ha is a pioneer in revitalizing eastern Downtown’s dining scene. When he first came to the United States at 19 years old, he barely spoke a word of English. Walking around the college cafeteria with his lunch tray, he determinedly introduced himself to different tables each day with the only English sentence he knew: “Hello, I’m Jason. How are you?”

A couple of decades later, and Ha is now a Californian-ized Korean. He speaks perfect English with a California twang but retains dramatic Korean expressions. His skin is tanned from years of windsurfing with multi-ethnic friends, but he still attends a Korean church.

Most eco-friendly tours in Korea
CNNGo

Becoming a tourist hot spot may mean fame and money for the locale, but it can often bring destruction to the beauty that prompts people to go there in the first place.

While eco-friendly tourism has been gaining popularity around the world and organizations such as the International Eco-Tourism Society have been around since the early 1990s, environmentally friendly tourism in Korea is only a recent development.

According to Good Travel, an environmentally responsible travel agency in Seoul, eco-tourism has is becoming more and more popular within Korea.

Here are some the most ecologically interesting tours in Korea that are also focused on conservation. 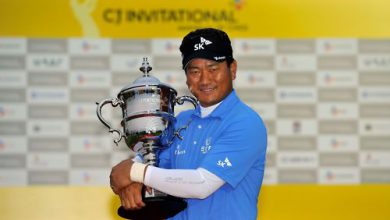 KJ Choi came back from three strokes behind heading into the final round to win the inaugural CJ Invitational in Yeoju, South Korea by two strokes on Sunday. The […]