The term “ulam” means “main dish” in Tagalog. It is exactly what Alexandra Cuerdo’s documentary, directorial debut “ULAM: Main Dish” works to become: a “main dish” that can spark conversations of Filipino American identity and its subsequent relationship to not only just Filipino Americans but greater society as a whole.

The documentary, which took three years to make, follows 11 self-made Filipino chefs who have risen to the top of the culinary scene. The film explores not only how they got here, but where they see themselves and the Filipino food industry going in the years to come. Interviews broach the idea of “crab mentality,” a way of thinking that involves the sabotage of others’ success, and the lasting effects of Spanish and American colonization.

Cuerdo grew up in Orange County, California. As a child, she was one of the only Asians at her Catholic school felt it was a “personal mission to create an unapologetically Asian film” having grown up in a place where she did not see herself represented in either media or in her community. Cuerdo has also worked on films, television and digital content for HBO, ABC, NBC and Netflix.

Tough opening question! I’d have to say that my favorite Filipino dish to eat would have to be my lola’s kare-kare. It’s a peanut butter-based stew, and it has oxtail with all these crushed vegetables and you eat it with rice and bagoóng, which is a shrimp paste. It’s super savory, really delicious. I’m getting hungry just thinking about it!

What turned your attention to focusing on food for the documentary? What gave you the idea?

It’s where we connect. For me growing up, part of my identity and part of my family was to eat together as a family. The joke in my family is that, “All Filipinos do is eat.” If you’re ever invited to a Filipino party or to a person’s house who happens to be Filipino, the first question you get is, “Have you eaten?”

Why did you feel this film was important to make?

A lot of these chefs experiences mirrored my own history, where a lot of their parents or they themselves were immigrants. They all had pressure at some point or another to take stereotypically immigrant jobs or to succeed in a stereotypically immigrant way. There’s nothing wrong with that. We need all the doctors, lawyers, and engineers we can, but to do something creative. To be a chef was really rebellion in a way. Each of them had to forge their own path. For me, I felt that way as well, being a filmmaker and a first-generation Filipino American, it felt like this was my own story that I was able to tell.

How important is food in your life, beyond obviously just needing to eat — how did it help you connect with your culture?

Food for me on a daily basis is a passion. I love to cook and cook every day, as often as I can. It’s part of my culture as a Filipino American. It’s how we care for people. For me, the documentary was delving deeper beyond that. What does it mean to make Filipino food in this day and age? What kind of statement are you making as a Filipino American? Because there are many Filipinos in the restaurant industry, many whose day jobs are not making Filipino food.

There are a lot of Filipinos making Dutch food or Italian food. The list goes on. There’s nothing wrong with that, but there is something really interesting that you see among chefs in the documentary, where there was this element of patience that you hear, that you can be unapologetic about being Filipino, and that that was OK. I had never seen that before outside of my own family! That was incredible! Making Filipino food with these chefs was so much more than doing something that felt familiar.

It was a risk, it was a career move in a way for each of these chefs to say, “This is me. This is my creativity, my culture, this is who I am as a creative individual. I’m proud, I’m proud to be Filipino.” That was a game changer because it made me feel like, as a filmmaker, I should be proud.

How have Asian Americans responded to the film?

We’ve had really wonderful fans of the film come afterwards to us crying and telling us that they’re so happy to finally see a film that looks like them and reminds them of what it is to be Filipino, to be proud of their culture. Other Asian Americans in the industry are saying they’re so inspired because it is so hard to open up a restaurant in this day and age for anybody, especially for people who were not born wealthy.

What was the biggest challenge about filming?

Honestly, the hardest part was money. We weren’t backed by any major studio. We didn’t have HBO money, it was just us. For a long time, it was this process of convincing people that this was a worthy topic, and that people would want to see this film. At the time it was very much, “So who are you with? Netflix? You’re doing a documentary on … Filipino food? Why?”

Those are the questions we would get all the time. I guess for me, it’s like, “Haters gonna hate.” Now a lot of those people are very invested and excited about the film, which is great! I think it’s just something that you see in human nature, that people don’t really believe in something until it’s proven. I’m hoping that now that there is such a demand for this film, and that there’s such a demand for Asian American media, I hope that we can say, “Hey, this is proven. Help us make the next one.” It’s all about continuing and not stopping.

What do you want people to take away from watching “ULAM”?

Try Filipino food! That’s the No. 1 thing. Beyond that, I hope that this film helps non-Filipinos and people in general understand a little bit more about our culture and where we come from, and I hope that can afford us another degree of respect. At the end of the day, I think that’s what these chefs are all pursuing, is respect for their food and respect for culture because that’s what we all deserve. We all deserve to be respected. So yeah, try Filipino food. 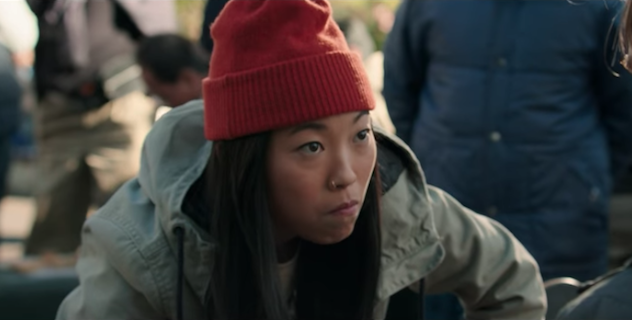 Itching to see actress-musician-comedian Awkwafina in the upcoming heist comedy “Ocean’s 8,” the all-female spinoff the billion-dollar franchise? We’ve got a first look at her character Constance! Constance is a New York […]