Uli Stielike, the head coach of South Korea’s national soccer team, has placed doubts on the Korean education system, suggesting that his team’s bland playing style during games may stem from the country’s rigid teaching model in childhood education.

German coach Stielike, who recently won overwhelming plaudits from the Korean public for taking the national team to its first Asian Cup final in 27 years, told Spain’s daily newspaper AS that he has been taken aback by the players’ tendency to relentlessly follow directions without improvising what they’ve been taught to do on the field.

“I’ve never worked in an Asian country before,” said Stielike, who took charge of the Korean team last October with the mission of revamping the soccer landscape in the country. “In terms of team discipline, a coach couldn’t ask for more from these players. Their willingness to work hard is impressive. What they lack, due to the education of players, is greater creativity.”

Stielike has praised his team in the past for its ability to play with togetherness, highlighting its gritty efforts when defending, but he also expressed frustration over the passive attitude of the players as they are often reluctant to take risks and create innovative plays when attacking. Likewise, Korean players combined for just five runs into the opponent’s penalty box in three games at last year’s World Cup. Ivory Coast, which was also eliminated after three games, had 18 runs into the area.

The 60-year-old coach was a legendary midfielder and defender during his playing career, having played for European powerhouses, such as Borussia Monchengladbach and Real Madrid, throughout the 1970s and 80s in addition to winning the European Championship with the German national team in 1980.

In Spain, where he played for Real Madrid from 1977 to 1985, Stielike still remains as one of the most beloved foreign players to have played for the club that boasts the highest number of Spanish and European titles. He was well-known for his elegant and imaginative style of play, often acting as the playmaker for his teams.

“I want to see moments of surprise from the Korean players,” Stielike said. “But it is a little curious … I remember the first time I asked a player during practice what he thought about my instructions. He looked at me as if I were treating him like he was someone from Mars.”

For decades, schools in South Korea have produced students who score among the highest in standardized tests in comparison with students from other OECD countries. However, the so-called “K-12 education” in Korea is so ruthlessly focused on exams, most notably the annual college entrance exam, that an average schoolchild works up to 13 hours a day, while an average high school student only sleeps 5.5 hours a night because of schoolwork, according to an article by The New York Times last year.

The rigid school system has allegedly made South Korea the world’s top producer of unhappy and even suicidal teenagers. Taking a step further, Stielike said that such an extreme culture has deprived Korea’s athletes of creativity and inventiveness, which are critical elements in soccer as there’s only so much a coach can do during a 90-minute game that only has one 15-minute break at halftime, unlike basketball, which allows multiple timeouts for coaches to use during games to give instructions to the players.

For years, top tier professional soccer players in Korea have been testing their abilities in Europe, where the quality of the games is known to be higher than that of their country’s domestic K League. Korean national team captain Ki Sung-yueng is a key figure at Swansea of the English Premier League, while the country’s 22-year-old star goalscorer Son Heung-min has been playing in Germany since he was just 16.

However, the K League still serves as the “farm system” for the national team as even players who later move to Europe must develop through the youth academies of South Korea’s professional teams. Ultimately, the K League must develop more competitive players who can create plays for themselves rather than ones who simply adhere to what their coaches say, Stielike said.

“The Korean League, truthfully, is not very strong,” the coach continued. “By contrast, the fans’ expectations on their national team is immense. We have four players playing in Germany, two in England and the vast majority are playing in Asia. I doubt that the level of such leagues allow us to raise the level of the national team.”

But Stielike, who is under contract until 2018, is still confident that his experience could steer Korean soccer back on the map of world soccer.

“Provided that we qualify for the next World Cup, I’m contracted until 2018,” he said. “The aim is to pass the group stage of the World Cup [which the team failed to do in 2014].” 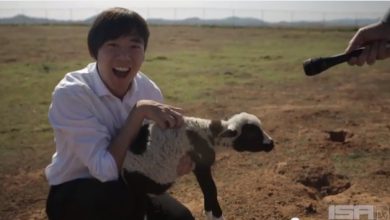 Happy Lunar New Year everyone! This year is none other than the Year of the Sheep. Or maybe it’s the goat or the ram– that seems to be up for debate. […]