Five-term FIFA president Sepp Blatter was set to announce a special election for his replacement to be held in February of next year, but the press conference on early Monday didn’t go exactly as planned.

As Blatter was preparing to address the press, English comedian and prankster Simon Brodkin, whose stage name is Lee Nelson, suddenly took the stage and introduced himself as a “North Korean World Cup delegate” who was bidding to be the host for the 2026 World Cup.

In a blatant nod to Blatter’s alleged corruption, Brodkin threw a handful of bills over the FIFA president, saying, “Here you go, Sepp,” as he was handily escorted out by security guards and cameras snapped away.

Blatter refused to speak to the media until the money had been cleared away. “This has nothing to do with football,” he said.

Simon Brodkin, aka Lee Nelson, being taken away by Swiss police after today’s money throwing prank at FIFA. pic.twitter.com/WzFlr0PmFA 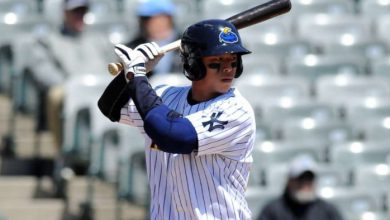 by JAMES S. KIM | @james_s_kim editor@charactermedia.com As the second half of the 2015 MLB season underway, here’s a look at how the players of Korean descent fared in […]