Folks who tune into the figure skating events at the 2018 Winter Olympics in Pyeongchang are sure to be stunned by the amazing artistry and athleticism exhibited by the skaters, but one American figure skater in particular is poised to render us breathless — after all, he’s done it before. Here are 10 times the 18-year-old Olympic figure skater Nathan Chen took our breaths away on the ice!


1. That time at the 2017 U.S. Championships when he became the first person ever to land five quadruple jumps in a single program.

2. And then he did it again at the Four Continents Championships.

3. When he just let loose and felt the music at the U.S. Nationals Gala Exhibition.

4. At the Grand Prix Rostelecom Cup in Moscow last year, when he stunned the world by beating the reigning World and Olympic Champion Yuzuru Hanyu with his routine “Mao’s Last Dancer.”

5. Then, he brought his winning routine to the Grand Prix Finals.

6. Speaking of the Grand Prix Final, his short program was pretty spectacular, too!

7. Chen hit the U.S Championships ice in January and brought out his five quads once again.

8. When he captured all of our attentions at his senior debut at the 2016 CS Finlandia Trophy.

9. Nathan Chen was already pushing the boundaries of figure skating long before he became an Olympic Gold hopeful. Here’s his short program at the 2016 U.S. Nationals:

10. Check out the stylish blue shirt on young Chen in his 2013 Junior Grand Prix free skate!

The Pyeongchang Olympics kick off Feb. 9. What are you most looking forward to? 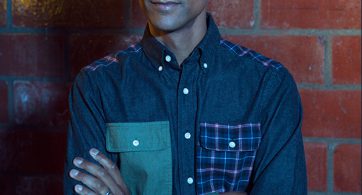 There’s a sweet sensitivity to Danny Pudi. Off the bat, he’s warm and affable. He makes you feel like an old friend. In between camera setups for his photoshoot, […]