“To All the Boys I’ve Loved Before” welcomed a roaringly positive reaction from audiences worldwide. The teen rom-com, starring Lana Candor and Noah Centineo and based on Jenny Han’s bestseller, has contributed to an ongoing conversation in regard to the lack of Asian leads in front of the camera.

Paired with the premiere of “Crazy Rich Asians,” we’ve seen a hike in interest regarding Asian and Asian American stories. To shine a light on more creative voices in the literary world, here are 11 young adult Asian American protagonists you may like if you loved Lara Jean!

In Menon’s bestseller, two Indian Americans with differing opinions about their arranged marriage try to figure each other out during a STEM summer program. Dimple and Rishi are two lovable characters whose stories unravel in the age-old tale of opposite personalities growing into their relationship, both professionally and romantically. This story also incorporates aspects unique to Indian culture, such as Hindi words and Indian fashion. It’s dorky and humorous — just like Lara Jean!

This concise debut novel from Wang presents a Chinese American graduate student who is mentally confronted with two dilemmas: her fading attraction to chemistry and her fading chemistry with Eric, her boyfriend of four years. She’s living a relatively flawless life following a typical Asian upbringing, but she can’t seem to answer one question: What does she really want? The main character remains anonymous throughout, allowing readers to immerse themselves in the mind of the protagonist. It’s a jumble of observations and realizations, relatable for any 20-something who has questioned herself, her career and her place in this world.

“Something In Between” by Melissa de la Cruz

“Something In Between” is a politically relevant take on the Romeo and Juliet trope. Jasmine de los Santos has everything going for her heading into college, until it’s revealed that her family members are undocumented. Facing the threat of deportation, the Filipina American has to rebuild everything she has earned. Along the way, she meets Royce Blakely, the Mexican American son of a congressman working to deport illegal immigrants. It’s a warm story about culture, family and identity that shows a glimpse of what minorities face in the United States.

“Emergency Contact” explores the inevitable awkwardness that comes with a budding relationship. Penny is an essentially average Korean American girl transitioning from high school to college. Sam works and sleeps at a cafe and is trying to get over his ex-girlfriend. Their first meeting is nothing close to cute, but as they keep in touch via text message, their digital chemistry unfolds into something physical. Together they work to overcome the mental and emotional obstacles of their pasts.

“Written in the Stars” by Aisha Saeed

Naila is in love with a boy named Saif — the only problem is the marriage her parents have arranged for her. When her strict parents discover her secret boyfriend, her reality shifts. Her parents believe she’s lost touch with her heritage and whisk her away to their native Pakistan for a month. This intense novel reveals the dark side of forced marriages, but the romance between Naila and Saif will have you rooting for their relationship from start to finish.

“It’s Not Like It’s A Secret” by Misa Sugiura

Self-proclaimed as “part ‘To All The Boys I’ve Loved Before’ and part ‘Simon vs. the Homo Sapiens Agenda’,’” this story follows 16-year-old Sana Kiyohara as she moves from Wisconsin to California. With her, she carries some huge secrets: She suspects her dad is having an affair, and she’s pretty sure she’s a lesbian. Sana meets a girl named Jamie Ramirez, and as their relationship blossoms and an interesting love triangle starts to form, Sana must learn to stop ignoring the truth and to deal with what comes after.

Mei is a 17-year-old Taiwanese American who is about to be a freshman at MIT — the next step in fulfilling the American dream of becoming a doctor, as predetermined by her parents. There are a couple of problems, however: She’s a germaphobe, she finds biology boring, and she likes a Japanese boy, Darren Takahashi. “American Panda” explores the pressures of the model minority stereotype, especially how those expectations can affect your relationship with your parents and family.

“Fish Out of Water” by Natalie Whipple

This book not only tackles romance and racial identity, but also mental illness. Mika Arlington finally lands the internship of her dreams at the Monterey Bay Aquarium, but her plans are shattered when her estranged grandmother Betty shows up unexpectedly. Betty has dementia and needs her family’s help, but she’s rude and intolerant of Mika’s parents’ interracial relationship (she’s half Japanese!). At her summer job, Mika meets the bratty manager’s nephew, Dylan — another problem to add to her list.

“Saints and Misfits” by S.K. Ali

Janna Yusuf is a lot of intersecting identities — a Muslim half-Egyptian and half-Indian who also happens to be a teenage girl. “Saints and Misfits” tackles heavy topics like sexual assault and discrimination, but it serves to paint a realistic image of what a Muslim American teen may be going through during their teenage years. Filled with diverse characters and informative writing, you’ll leave this book with a renewed image of Islam.

“I Believe in a Thing Called Love” by Maurene Goo

This one’s for all of the Korean drama fans out there! Desi Lee seems to be good at everything except romance. She plays varsity soccer and is student body president, but has never had a boyfriend. So she plans to win over the cute new guy, Luca Drakos, by studying K-dramas and formulating her own step-by-step guide to a successful romance. It’s a light read filled with fulfilling character development, drama references and ties to Korean culture.

The most magical novel on the list, “Soulmated” is a love story with a twist. Laxshmi Kapadia follows the path of many Indian American teens — either go to medical school or commit to an arranged marriage. But then, Liam moves in next door. Liam Whelan is an Irish royal empath looking for his soulmate in order to maintain his family’s standing and to gain legendary powers others seek. While both of their parents do not agree on this relationship, Liam is inexplicably drawn to Laxshmi. This fantasy is definitely a standout for young adult romance fans. 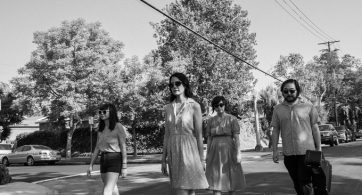 Lynn Chen is making her directorial debut with “I Will Make You Mine.” A Kickstarter began Wednesday. Chen, who is best known for starring in the 2004 romantic comedy […]