What is Chinese, what is American, and what is Chinese American? Peter Ho Davies, in his new novel “The Fortunes,” unraveling through 150 years, writes about the emergence – and perhaps the realization of – that identity, and of belonging and representation.

The novel spans four narratives of Chinese Americans and migrants, three of them historical: Ah Ling, servant to a transcontinental railroad baron in the late 1800s; Anna May Wong, Hollywood’s first Chinese American star in the 1920s; Vincent Chin, whose hate-crime death in 1982 sparked an unprecedented unification of the Asian American community; and the fictional John Ling Smith, a half-Chinese, half-white contemporary writer.

“There’s a thread that connects each of them together, and they’re these ambivalent figures who struggle with the very nature of their role as representatives [of the Chinese community in America],” Davies said.

Davies himself comes from a half-Chinese, half-Welsh heritage. Though a Brit by birth, the author has lived half his life stateside. If the critically lauded, Booker Prize-long-listed “The Welsh Girl,” his debut novel from 2007, was an attempt to understand his own relationship to the Welsh side of him, this one is an effort to do the same with his Chinese side.

“The focus [in ‘Fortunes’] on being Chinese American is less coming from my parental heritage but more coming from having now lived as an immigrant, of sorts, in the U.S. for the last 25 years,” Davies said. “My point of connection to my half-Chineseness exists, but it’s also strong to my Chinese Americanness, from experience.”

John Ling Smith, the protagonist of the book’s final arc, is a character that largely mirrors Davies, from his half-Chinese background to his profession. Smith, traveling to China for an adoption, grapples with that heritage, questioning everything – from his all-American name, split down the middle by “Ling,” to his own conceptions of what Chinese Americans can and cannot do as Asian Americans (play ping-pong and sing karaoke, for two.)

“What kind of a name for a Chinese kid is John, anyway? What were they thinking?” Smith questions at one point in his narrative, and recalls his mother’s words to him after a party one New Year’s Eve: “‘For Chinese the exterior, the face, is what counts, what is real. But in the West, it’s the interior that is the true self. … And if inside and out don’t match, we don’t know what we are. One or the other? Or both or neither?’”

That very idea is confronted by Davies’ characters in each of their respective eras. Wong, who represents the most documented figure in “Fortunes,” sneaks out of her neighborhood of Los Angeles’ Chinatown to watch films inside theaters, the “first place she felt like an American.” Yet, when she embarks on her own acting career, she is denied from being seen kissing a white man in a movie, and is told she is “too Chinese” for another role portraying an Asian woman.

It’s only years later that Wong – it should be noted that Davies acknowledges having taken speculative liberties with her story, as well as Ling’s and Chin’s, with the help of interviews and other documentation – realizes she does not represent just the Chinese to America. She represents “the new name she’s started to hear … a gift of the [Second World War], now that boys from Chinatown can fight for America”: Chinese Americans.

“I wanted to resist the duality implied by any hyphenated identity, like ‘Chinese-American,’” Davies said. “It’s always, you have to choose one. Are you Chinese or American? We’re placed in the position of having to choose, which is an impossible one. I suggest a sort of middle ground, where it’s not either or, but both.” 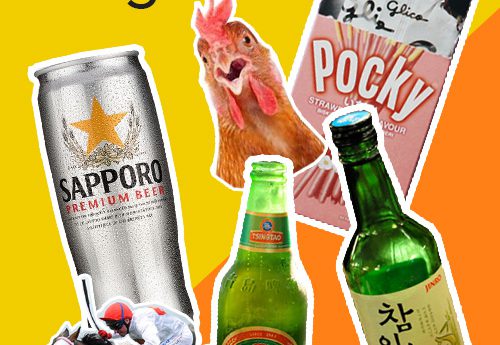 Tired of playing beer pong? Try some of our favorite Asian alternatives. (And remember to drink responsibly.) via GIPHY 1. Titanic You’re probably not going to want to be […]