Oh, the strange things you discover scouring your Instagram feed. Tap after tap takes you to a place of exploration. Maybe colorful, glittery slimes are your thing, or extremely decadent desserts, or hilariously bad prank fails, but our favorites hail from Asia, where people have some of the cutest, most offbeat pets. Let’s just say they’re definitely not your average Petco purchase.

This pup-like creature lives in Japan. He loves to wag his tail while squealing for dinner (it’s THE cutest sound), gliding quite elegantly in bathtubs (strangely very therapeutic to watch), playing tug-of-war, and taking naps while half-falling out of his doggy bed. Definitely adorable enough to forgive for eating with his mouth open.

Enn and Yui the Fennec Foxes

Agile with a wagging tail and a screeching yowl, these two pretty creatures come off as an interesting hybrid between a dog, a cat, and a bat. They star in a live-action, Japanese-language Instagram series, created by their humans. Enn and Yui are like prototypical siblings fighting over who gets that drink of water first, or fighting to win wrestling matches, but in the end, it’s all love because they love their cuddle sessions too.

Uni broke the internet last year when his mama gave him a very interesting haircut. Now back to his regular ’do, he’s still a sight to see. Uni is an adventurous guy. He likes long walks on his leash and taking in new sights. He even gets to go grocery shopping with his mama!

It’s a bird! It’s a plane! No wait — it’s a palm-sized sugar glider, gliding across the room! This bite sized, bug-eyed creature is named after our favorite 3 a.m. snack, Pizza! He’s not the most coordinated guy — terrible at playing catch — but the way he shyly cozies up to his human, latching onto the back of his human’s denim jeans or snuggling into their sweatshirts, makes him so endearing and lovable.

Let it be known, Soba the Prairie Dog will put anybody with whiskers to shame. The 4-year-old’s favorite thing to do is just chill. His favorite spot is being nestled on top of his human’s tummy or sprawled out on the floor. He likes to snack and is a good boy and eats his veggies — kale, brussels sprouts, carrots! 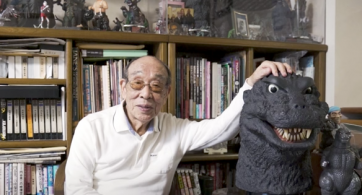 The actor inside the original “Godzilla” suit, Haruo Nakajima, has passed aged 88. Nakajima began playing the giant Japanese monster in 1954, with “Godzilla, King of the Monsters,” and […]