Indian American comics like Aziz Ansari and Mindy Kaling are making their mark on Hollywood and leading pop culture discussions – and we’ve got a few more suggestions on talents you should be paying attention to.

The India-born, NorCal-raised comic was one of Jon Stewart’s last hires on “The Daily Show” and continues as a special correspondent. The Off-Broadway solo theatre show “Homecoming King,” in which Minhaj shares his experiences being a first-generation immigrant, is due to tour North America next month.

If you love comedy, chances are that you’re aware of the fast rise of Nancherla. After making waves in 2013 as the first Indian woman to perform stand-up on late night TV for “Conan,” she has gone on to write for Seth Meyers, be named as one of Variety’s “Top 10 Comics to Watch for 2016” and has signed on for a half-hour Comedy Central special.

All right, we know – Singh, the YouTube star better known as “Superwoman” on YouTube, is Indian Canadian, not American. But she’s a hard one to resist including on a list like this, especially with her success in garnering more than 9 million subscribers and for being ranked one of YouTube’s highest-paid stars by Forbes earlier this year.

Ali, who started out as a stand-up comic, is one of the main cast members of the new “Lost” parody TBS series “Wrecked,” in which he plays a Los Angeles sports agent named Pack.

Kondabolu, who hails from Queens, centers his comedy on political and social issues as one-half of a podcast, “Politically Re-Active,” with W. Kamau Bell, and as a stand-up act who has appeared in a slew of late-night talk shows and his own Comedy Central special in 2011.

Don’t let Lakshminarayanan’s former gig as a venture capitalist throw you off – she’s this year’s winner of the Liz Carpenter Political Humor Award, and has been heralded as one of San Francisco’s best stand-up acts and storytellers by the SF Weekly, SFist and the San Francisco Bay Guardian.

It doesn’t get bigger than opening for the Indian Prime Minister – Satyal, who started doing stand-up comedy in 2002, and who created the viral “I Am Indian,” performed for Narendra Modi last year in Silicon Valley. 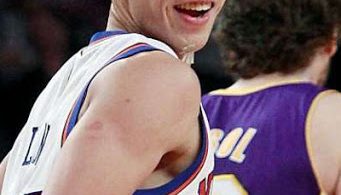 As he returns to New York in a Brooklyn Nets jersey, Jeremy Lin is hoping he’s found the long-term home he’s been searching for. In his first public comments Saturday following […]