As he returns to New York in a Brooklyn Nets jersey, Jeremy Lin is hoping he’s found the long-term home he’s been searching for.

In his first public comments Saturday following an announcement last week that he’d signed a three-year, $36 million contract with the Nets, Lin said he is “not shying away” from taking on a leadership role as he enters the franchise as a full-time starting point guard.

“I’m definitely coming in [understanding] what my role is,” Lin said while watching the Nets at the Las Vegas Summer League. “I’m the playmaker. I’m the point guard. I’ve got to lead. I’ve got to be an extension of the coach.”

That Kenny Atkinson, his former assistant coach at the New York Knicks, heads the team as its new coach certainly helped the deal.

“[The Nets and I] talked a lot about culture and establishing a kind of identity and work ethic,” the Linsanity star said. “And I just want to help in terms of that and … it’s kind of a blank slate for the organization in a lot of ways, bringing in a new GM and a new coach and I want to be a part of that.”

Atkinson told ESPN.com that Linsanity – which made Lin one of America’s biggest sports stars in 2012 – was “a happenstance.”

“[Lin becoming the Nets’ starting point guard] is a long-term thing, and coming to a system that was maybe a little different to what he was playing in New York. … I think he is smart enough to be able to adjust to a new system, new team. That is one of the things I trust – his adaptability,” Atkinson said.

Leaving the Hornets, his fifth team, as a free agent back earlier this year, Lin had said that he was looking for exactly that – a long-term home where he would have a larger role.

“For me, being 27 now, that’s something I wanted. It’s a challenge I wanted to embrace, and I can’t wait to do that,” Lin said. “I’m going to be the guy bringing it up the floor and leading the team. And that’s definitely something that appealed to me.”

Lin also commented Saturday on the huge influence of Yao Ming, and the awareness he himself has in being the face of basketball for Asian Americans. 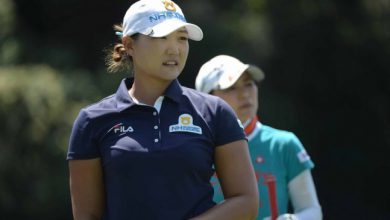 Two days into the U.S. Women’s Open at CordeValle in San Martin, California, Koreans are dominating the top-5 rankings, with Sung Hyun Park in the lead. The 22-year-old Park, […]