South Asian storytelling has long been treated as a monolith. Whether through stereotypical portrayals of taxi drivers and IT workers or outdated terrorist storylines, Western media has often made a mockery of our complex lives.

The experiences, intersectional identities and joy which color our lives have not been properly depicted in American media until recent years, with the arrival of television shows like “Never Have I Ever,” “Ms. Marvel,” “We Are Lady Parts” and more that finally tell our own stories.

For this issue, we’ve compiled a list of South Asian-centered media created by actors, directors and writers of South Asian descent. These eight films and shows, which all came out within the past year, both celebrate South Asian culture and provide hours of entertainment.

Created by British Pakistani comedian Bisha K. Ali, “Ms. Marvel” stars Iman Vellani as Kamala Khan, Marvel’s first-ever Pakistani American, Muslim superhero. Kamala, an Avengers-obsessed gamer from Jersey City, unexpectedly takes up the superhero mantle when she gets powers herself. The show, which premiered this past summer, follows Kamala as she comes of age, explores her powers and discovers her hidden family history.

“Never Have I Ever“

Mindy Kaling’s semi-autobiographical coming-of-age drama stars Tamil Canadian actress Maitreyi Ramakrishnan as Devi, a first-generation Indian American teenage girl trying to cope with the death of her father while balancing family life, friendships, high school classes and, of course, a love triangle. The third season premiered in August of 2022 and shows Devi continuing to grow into herself and deepen her relationships with her family and friends. The series also stars Richa Moorjani, Poorna Jagannathan and Megan Suri.

“Fabulous Lives of Bollywood Wives” is essentially the Indian version of “The Real Housewives.” The reality series follows the glamorous lives of Maheep Kapoor, Seema Kiran Sajdeh, Bhavana Pandey and Neelam Kothari as they gossip, shop, manage their kids’ entertainment careers and get into all sorts of drama. While the latest season, out September of this year, might not give a full look into these ladies’ lives, it will surely make you laugh.

“Wedding Season” is the South Asian American summer rom-com we’ve all been waiting for! With a screenplay by Shiwani Srivastava, the film follows acquaintances Asha (Pallavi Sharda) and Ravi (Suraj Sharma). Asha is an economist who has recently broken off her engagement and left her Wall Street job. Asha’s horrified mother, Suneeta (Veena Sood), sets up a dating profile for her and Asha eventually meets Ravi, who turns out to be a wealthy DJ. The two pretend to date during a summer full of weddings to avoid further marital pressures from their parents, but, naturally, end up falling for each other—fast. The film also stars Rizwan Manji, Ari Afsar and Manoj Sood and premiered on Netflix this past summer.

This tender coming-of-age film was released November of 2021 and is written and directed by “Troublemaker” creator Geeta Malik. “India Sweets and Spices” follows University of California, Los Angeles freshman Alia Kapur (Sophia Ali), as she returns to her New Jersey home for the summer and must once again face her family and their social circle’s emphasis on marriage. The film has all the makings for a good drama: gossipy aunties, a meet-cute at a grocery store and a secret family history. However, it also touches on more serious subjects, like class, gender and feminist movements in Indian culture.

“Eternally Confused and Eager for Love“

“Eternally Confused and Eager for Love” is an Indian comedy-drama created and directed by Rahul Nair. The series stars Vihaan Samat as Ray, a sweet but shy 20-something who is navigating young adulthood. Audiences follow Ray as he listens to his inner voice, “Wiz,” while struggling with his love life and the casual dating scene. “Eternally Confused and Eager for Love” captures all the awkwardness and innocent joy of first dates and unrequited crushes. Released in March of 2022, the show is produced by multi-hyphenate filmmakers Farhan Akhtar, Ritesh Sidhwani, Zoya Akhtar and Reema Kagti. It also stars Dalai, Ankur Rathee, Rahul Bose and Suchitra Pillai in supporting roles.

“Modern Love Mumbai,” which debuted in May of 2022, is an Indian romantic comedy anthology series based on the American version of “Modern Love.” Inspired by the New York Times column of the same name, the show is produced by Pritish Nandy and centers on six incredibly personal, yet universal stories of human connection and love, in all forms, including parental, familial, romantic, sexual and self-love in the city of Mumbai. “Modern Love Mumbai” fearlessly explores a range of topics, from navigating dating apps to deciding whether to come out to an ailing grandparent, offering layered, truthful representations of love.

Based on the 2013 novel by Sachin Kundalkar, the 2022 film “Cobalt Blue” tells the story of a Marathi brother (Neelay Mehendale) and sister (Anjali Sivaraman) who fall in love with the same man (Prateik Babbar), inevitably causing a family schism. Although fictional, the movie depicts many realities of queer love in India, from isolation and fear to romance, closure and self-reflection. 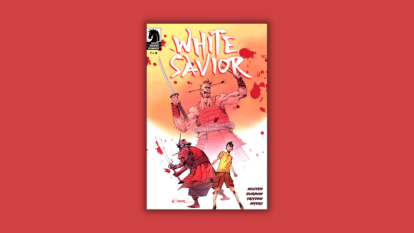 The co-author of Dark Horse’s newly released “White Savior” speaks on the creative process and Asian American representation in storytelling.