Are you ready for EastMeetEast, a dating app specifically for Asian Americans?

A New York startup company has raised $1 million to create the app. EastMeetEast is a dating site designed to match Asians in English-speaking countries. It announced recently it will use the seed money it gathered to further fund and develop a mobile platform.

The company distinguishes itself from other dating sites by catering to the specifics of Asian dating culture, according to Mariko Tokioka, the company’s CEO and founder. She said her competitors treat “all Asians as the same” by lumping them together.”

“EastMeetEast has a specific focus on Asian dating culture,” Tokioka said. “We did our own research and found out that Asian women care more about culture, education and occupation while Caucasian women are more focused on physical features.”

According to Tokioka, the app’s features includes allowing a user to connect with another user who emigrated to the United States at around the same age.

Known as North America’s largest and most active Asian dating site, the company grew sevenfold last year and is now looking to expand in Canada, Australia, the United Kingdom and eventually Asia itself.

“In the next nine months, we’re going to expand to 12 other cities,” she said. “We’ll also be in Asia by this year.”

The site, which is free for women but asks men to pay a monthly fee for membership, plans to work with prominent Asian American and Asian Canadian YouTubers, such as the Fung Brothers, David So and Linda Dong to promote the app. 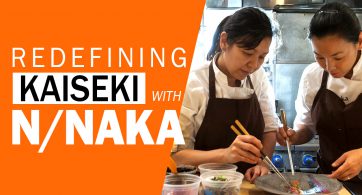 Chef Niki Nakayama, of n/naka in Los Angeles, is a master of modern Japanese kaiseki cuisine. You can also find n/naka featured in our limited edition 2016 annual issue, […]