In 2007, a suburban county in Virginia was the site of a fierce battle over immigration. Those with deep roots in Prince William County felt threatened by a new ballooning Hispanic population, and responded by pressuring the district supervisors to adopt an ordinance with the purpose of cracking down on their new, unwanted neighbors.

Annabel Park, who in 2007 was the national coordinator for a grassroots effort that helped pass U.S. House Resolution 121, also known as the “comfort women resolution,” and her boyfriend Eric Byler, took notice. Something was stirring, and they wanted to capture and document what they anticipated would transpire.

“It just felt like there could be a war—a civil war over the illegal immigration issue,” says Park, who is a Seoul-born activist and filmmaker based in Virginia. “We just started shooting to have a better understanding of what was going on. We just couldn’t understand why this was happening.”

On July 10, 2007, the county’s supervisors, led by Republican chairman Corey A. Stewart, unanimously passed the “Prince William Immigrant Resolution,” which required police officers to check the legal status of anyone who was suspected of being an undocumented immigrant. Stewart was then reelected in November, using “Fighting Illegal Immigration” as his campaign mantra.

“The resolution itself was frightening because it encouraged racial profiling,” says Park, 41. “It’s unconstitutional, and very difficult to apply. It was turning the county upside down.”

Prince William County, which sits outside of Washington, D.C., has gone through a huge demographic shift in the past two decades. Though predominately Caucasian, the Latino population had gone from 4 to 20 percent in the last 15 years. “They came because there was a huge housing boom,” explains Park. “They were part of the construction industry, and housing was much more affordable there.” So, she added, they settled and invested money into buying homes.

In resistance of the local xenophobic attitudes, an immigrant man converted the wall of a demolished house into a large white sign and demanded in big bold letters that the resolution be repealed. The address of this house was 9500 Liberty Street. The location became a lynchpin for the immigrant fight against the resolution, and was the site of many arguments between the two sides. The filmmakers documented one particular confrontation that involved an elderly Caucasian man yelling at a group of kids, telling them to learn English.

“That scene is very familiar to me,” says Park, who immigrated to the Lone Star State at the age of 9. “I saw people like that in Texas.” Park says she didn’t believe that man was racist, but that he was simply going through an identity crisis. “It’s that feeling of displacement. He felt he had a certain place in America. There’s the cultural identity crisis of America not being white anymore.”

As Park and Byler filmed, they realized that the conflict had to be exposed immediately. So six weeks after they began shooting, the two filmmakers started uploading entire clips onto YouTube with the channel titled “9500 Liberty,” which is still available with more than 100 clips uploaded so far. One video was viewed 26,000 times in its first week.

The YouTube channel, now an Internet sensation, became a breeding ground for the movement against the now-notorious resolution. The anonymity that the web provided was crucial because many feared the repercussions of speaking out publicly.

Those who voiced opposition could end up on “Black Velvet Bruce Li”—a blog that claims to drive “liberals and illegal alien apologists absolutely insane.” Greg Letiecq, one of the driving forces behind the resolution, was the author of the controversial but influential site; many in the county, including the supervisors, were avid readers.

“He was putting up all these very misleading and often just completely manipulative blog posts saying that Prince William County was being invaded, and that all Hispanics are criminals,” says Park. “People were afraid to stand up to him because they’d get smeared the next day on his blog.”

However, the YouTube channel helped stir up a counter movement. “People were sending messages to us and to each other, and started organizing through our channel,” says Park.

The resolution was eventually repealed last year, when the economic impact of the immigrants leaving for friendlier settings was realized. The county experienced a housing crash that far exceeded the national average, and small businesses were struggling without the customers that the immigrant population had once provided.

Park and Byler (director of Charlotte Sometimes) recently completed a documentary based on the conflict, titled 9500 Liberty. While the film centers on immigrants from Central American countries, Park believes that Korean Americans have a key role to play in the national discussion on immigration. So much that the film includes Korean subtitles.

“I want to use the film to talk to the Korean community,” says Park. “We are so connected with the Latino community. They work for us, they are our neighbors, our children are friends. We need to stand up for them. They’re being attacked right now, and it could be us tomorrow.”

Park, who has made several short films and YouTube videos, was transformed by the experience. “I wasn’t really that interested in the immigration issue, but now I really understand that it’s about our American identity,” she says. “The significance of the debate hit home. It changed my life.” 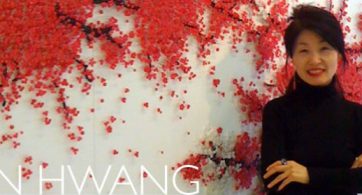 Instead of using ordinary buttons and pins to stitch up clothes, Korean-born artist Ran Hwang creates amazingly large installations of birds and cherry blossom trees. When you look up […]