To celebrate the release of Lisa Joy’s film debut, Character Media and Warner Bros. partnered together to host an advanced screening of “Reminiscence.” The film follows Hugh Jackman’s Nick Bannister as he uses a machine that can let people relive memories to solve the mystery of a former lover who one day goes missing.

Hosted at the CGV Cinemas in Los Angeles’ Koreatown, vaccinated guests came out to support the film and share the one memory they would relive if they had the opportunity to jump into the reminiscence machine.

“Falcon and the Winter Soldier” actor Desmond Chiam and his wife, dancer Sami Jayne, shared how they wanted to go back to the major milestones of their relationship. “I would relive one of my trips to [Las] Vegas where … I got super super sick,” Chiam joked, “because that’s the trip where I married [Sami]. How’s that for a twist ending?”

Similarly, “The Flash”’s Victoria Park chose to relive a moment from her honeymoon in Hawaii. “There was this one day when we went to this beach and we were the only ones there,” she described. “And it was just like the perfect day. It sounds cliché but it was just so lovely.”

“Reminiscence” star Daniel Wu also offered his answer, opting to relive the day his daughter was born. “[It] was like a really informative moment for me because I remember staring into her eyes and going … ‘My life is completely different now,’” he revealed. “As my daughter is growing so fast, I’m starting to forget about the moments of when she was a child, even though it wasn’t that long ago.”

Be sure to watch our video above for more answers and watch “Reminiscence” in theaters and on HBO Max. 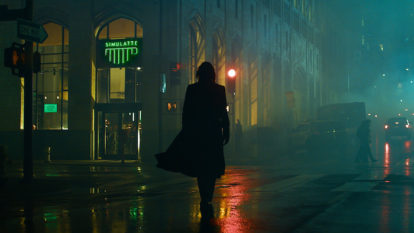 The stars of the original sci-fi classic are back, joined by the likes of Jessica Henwick and Priyanka Chopra Jonas.