Just like his characters on Amazon Prime’s “The Boys” and Netflix’s “Clickbait,” Abraham Lim is no stranger to adapting.

Lim got his first taste of the entertainment industry during his stint on “The Glee Project,” a reality television series in which the contestants competed through various musical challenges for the chance to be written into Fox’s acclaimed dramedy “Glee.” But while he could have continued to pursue music after his exit from the show, Lim felt it would be best for him to veer in a different direction.

“To be completely honest, I know that BTS and BLACKPINK and … many other K-Pop artists [are] absolutely killing it right now, [but] there’s a lot less visibility for Asian American recording artists and I just didn’t have that fortitude of pain to … pursue it,” Lim said, explaining why he went into acting. “I just discovered that it was a different branch of storytelling and I just fell in love with it.”

But per the typical second-generation immigrant pipeline, performing had been placed on the backburner for most of his life. Lim was a political science and international studies double major who was set to go to law school when he decided to focus on the performing arts instead. “When I told my mother that I was going to … pursue music and entertainment, that just broke her heart,” he said. “She doesn’t see many Asian people so therefore she’s worried about discrimination that I’m going to experience as a performer and actor.”

In recent years, however, Lim has been able to prove that she doesn’t have to worry about him much anymore. Lim recently booked Kenji Miyashiro, the long lost brother of Karen Fukuhara’s Kimiko, in the second season of “The Boys,” and Ben Park, a ruthless reporter, in Netflix’s unexpected smash hit, “Clickbait.” The series follows the perspectives of multiple people involved in a mysterious, viral kidnapping case.

Lim’s character in particular has gotten a lot of heat from audiences who find the reporter’s methods unethical, but Lim doesn’t hesitate to come to Ben’s defense. “To me, he’s someone that needs to be ambitious because he doesn’t come from a lot of privilege … He’s had to fight not only to survive but to also be heard and to be seen, which I think is something that we all share,” Lim said. As the actor himself has taken some big risks to be seen in the industry, it’s not hard to see why he feels protective of Park and empathizes with his character’s motivations.

Watch the full video above for more! 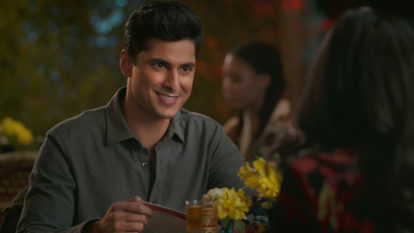 The “Grey’s Anatomy” veteran is keeping busy with a new show on NBC, but he has his eye on the bigger picture.