by ALEXANDER HYUN
Special to charactermedia.com

It’s been more than 60 years since Korea officially separated into two states.

Politics split the nation, but it was the people who ended up paying the price. Families were splintered by the Korean War and generations of Korean sons and daughters went on to live their lives never knowing whether their blood relatives beyond the DMZ still existed.

However, in 2005, a rare opportunity arose when the Red Cross tried to reunite some of these separated families through satellite video—if only for a brief two hours.

Mary Chi-Whi Kim, a poet, writer and professor at Savannah College of Art and Design, wrote a piece for the New York Times Magazine in 2006 recounting the experience of meeting her aunt, Bo Ok, for the first time this way.

Bo Ok is Mary’s father’s older sister, and the firstborn in the family. Bo Ok had headed north before the Korean War to pursue an expanded education, the article states. Mary’s father had not seen his sister since he was 14 and a boy living in South Korea.

It’s been seven years since the article, “Far Across the DMZ,” was published in the Times, but NPR’s Snap Judgment—a weekly non-fiction storytelling radio series and podcast—recently adapted the family reunion tale into an audio narrative.

“We don’t normally do these kinds of stories because Snap Judgment is a storytelling show that features a beginning, middle and end,” producer Davey Kim told KoreAm in a phone interview. “This story didn’t have all of those components, but it still resonated with me about what it’s like to have a family reunion five decades down the line, and I took this on as a side experimental story because it deviates from our usual material.”

The 15-minute segment, which first aired July 10 on NPR’s 300 member stations across the country, recounts the video reunion between Mary’s father, Chin Kyll, and Bo Ok. While it sounds as if Mary herself provides narration, her voiceover is actually taken from an extended interview with Kim.

“Mary Kim did a fantastic job and it sounds like she was narrating the story,” said Davey Kim. “But in actuality, I interviewed her for four hours and I cut those four hours of interview tape into the narrative.”

Mary discusses how her aunt appears on video, what she says about the North Korean regime, how her father had read a letter to his sister which he prepared beforehand, and Mary’s own realizations as an adult listening to her Korean immigrant father pour forth his emotions and memories to his sister.

Her aunt, Mary says in the segment, does not look as she expected her to look.

She is seen on video wearing 12 military medals on her black hanbok and had “plump cheeks,” much to Mary’s surprise.

“I had no idea how she might appear” she says. “I expected to see a living skeleton because of North Korea’s tendency to starve its own people.”

The segment, which features interspersions of Korean spoken by the character of Chin Kyll (voiced by Davey’s Father, Yongnam Kim), includes the episode where Mary’s father reads a six-page letter to his sister, describing his family’s life in the United States. In real life, that moment had lasted for an hour and a half—or 75 percent of the time allotted for the occasion.

Mary recounts how her father unleashes 50 years of repressed feelings regarding his separation from Bo Ok, sharing painful memories he had stored inside him all these years.

In response, Mary recounts, her aunt speaks only flattering words about the North Korean leadership and discusses her disdain for the United States. Bo Ok reveals how her leg was severed by a bomb during the war while her husband’s legs were injured and had to be amputated. Despite this, her aunt describes how the North Korean government had aided her own family, five children in all.

“We don’t have many years left now. All I want is to see our country unified…But we need to kick out the American bastards, then finally, we can meet and live happily together,” Bo Ok, voiced by Davey Kim’s mother, Mikyung Kim, says. “Such a good life in this socialist community wouldn’t exist in a capitalist nation.”

“I couldn’t tell if she was believing her own words,” Mary says, as she recounts seeing Bo Ok’s eldest son seated beside her, with cheeks resembling “cliff-like hollows.”

With time quickly running out from their reunion, Chin Kyll proposes that he and his sister sing a song over the satellite feed: Tong Il Jang, or “We Are One,” a composition created by South Koreans to meld the national anthems of both Koreas.

During the song, time unfortunately runs out on the satellite feed and the siblings’ reunion ends as the computer screen fades to black.

Ten years have passed since that video reunion with Bo Ok. While her father is not as hopeful in his sister’s fate, fearing that she may have met her end, Mary harbors a different sentiment. She still clings to the hope that her aunt is alive, and that one day, the family will reunite, despite the long odds.

“The reality is that many Koreans on both sides of the DMZ unfortunately will not be reunited in this lifetime,” Davey Kim said. “There are certainly cases where families have reunited and have gone on to live good lives but the reality is that this isn’t the case for everyone—this is the universal Korean story that I wanted to tell.”

To listen to the Snap Judgment segment in its entirety, click here. 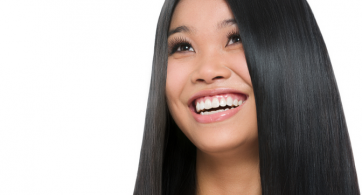 They say a woman’s hair is her crowning glory. But we feel anything but regal when we see more and more of that glory clogging the shower drain. […]