Ally Maki wonders if she would’ve had more confidence as a teenager if she was exposed to the types of representation that many of the young female fans she’s met have seen. When she was growing up, there wasn’t anybody on screen that looked like her, says the actress. And having been in the entertainment industry since she was 14 years old, there have been plenty of people who wanted to define that identity for her.

Maki has made countless screen appearances on TV, from “ER” and “10 Things I Hate About You” to “Dear White People” and “Wrecked,” which wrapped its third season on TBS in 2018. Her portrayal of Mina Hess on Freeform’s “Marvel’s Cloak & Dagger” is arguably one of her most electrifying and barrier-breaking roles yet.

Mina is an environmental engineer who works for the corrupt Roxxon corporation, the same company that protagonists Tandy (Olivia Holt) and Tyrone (Aubrey Joseph) are trying to bring down. However, Mina’s heart is in the right place and strives to use her scientific knowledge to save the world. Maki brings a fierce determination to the character, who isn’t afraid to call out anyone for their “dumb-ass” decisions. But her demeanor evolves throughout the first season, and Maki is able to channel her softness to the no-nonsense scientist, as she becomes a mentor and friend to Tandy.

The significance of portraying a smart, passionate woman in STEM on a superhero series isn’t lost on Maki. “So many women can relate to this character because she feels alone most of the time,” Maki says. “She’s searching for role models in an industry where there is no one like her; she’s the only woman in her field, working in STEM. She’s dealing with a lot of sexism in the workplace. The entertainment industry has not always been open to women that look like me, or what we have to say, so I think all of that bubbles through in why I find this role so important and why [Mina] resonates with me so much.”

When Maki attended Comic-Con for the show, she got a taste of just how many women and young girls also relate to Mina. “A lot of them showed up for Mina, which I was like, ‘What! For Mina? That’s crazy.’ But it was life-changing for me to hear all of these stories,” Maki says. “They’re saying Mina inspires them. These girls inspire me too because they’re the new generation—they’re younger and they’re finding these role models and they’re finding their self-worth and confidence at such a younger age.”

One of the most refreshing parts of the role, Maki says, was that the audition process was opened to women of all backgrounds. “It wasn’t written for any specific type of ethnicity, which I think is amazing because that means, when you’re going in, you’re just bringing whatever you bring,” Maki says. “Which I think is where we’re all heading—with different roles … not being too specific about, ‘It must be this, it must be this,’ but you’re really just looking for the heart and soul of the person to bring that to the character.”

The success of “Crazy Rich Asians” has also created a momentum that helped films like “Searching” starring John Cho to find critical acclaim, as well as nurture the careers of stars like Awkwafina and Henry Golding. It’s a wave felt by many Asian Americans like Maki, who felt unsure if their stories could reach mainstream audiences.

“We’ve had such a momentous year, and I would find myself crying all the time,” Maki says. “When I watched the movie, and even after, I was just having all of these feelings. It felt like this wave that was finally too much for everyone to control. We are all empowered by it. We’re all in run-it-and-gun-it mode right now, of like, ‘Hey, let’s keep this going. We cannot stop because the floodgates have now opened, and we’re all here and we’re all ready to tell our stories.’ … It really made us believe in ourselves, and it made us say, ‘Oh hey, we are the center of our stories.’ That’s been the greatest thing, realizing that.”

Meeting fans who broke down in tears over Mina Hess and seeing Asian Americans organizing for “Crazy Rich Asians”—all of those pivotal events in her life these past few years finally converged to the point where Maki felt like her “heart couldn’t take it anymore.” She wanted to do something about all of the overwhelming feelings she felt bubbling up internally, and that’s how Asian American Girl Club came to be.

Maki says that, as a kid, she was a serial club quitter. She loved joining everything from the Brownies to softball, but would stop going because she would feel excluded and not truly part of the group. So in December 2018, Maki founded AAGC to help other Asian American women, those who sent her letters and DMs sharing their stories of not being seen feel seen. She launched the organization without fully knowing exactly what the final form of the group would be.

“We launched it, and I swear, the next morning our inbox was just flooded, and I couldn’t even tell you [all the] emails and girls that were writing essays to us,” Maki recalls. “The girl that lived in Ohio who was the only Asian American girl in her high school and how she’s finding a new pride in herself—it’s just really beautiful.”

The group’s Instagram is stocked with photos of Asian American women (and men) donning AAGC shirts and stickers and sharing stories about their emerging identities and self-acceptance of their immigrant backgrounds. Part of the proceeds for each item sold on AAGC’s site goes to Period Movement, an organization dedicated to global menstrual equity. AAGC also provides scholarships to attend Period’s conference in New York City. Maki says future plans include supporting small businesses owned by Asian American women and women across the board. She hopes to soon hold an AAGC summit for women to build community and hear one another’s stories.

As a young girl, Maki says she was super shy, and spent a lot of time alone craving friendship. She’s now DMing women all over the world, with Instagram messages of “I think you’re awesome, we should connect” or “What can we do together?” that turn into coffee meetups and collaborations between her and other women.

“I was yearning for a sisterhood of women that really, really truly understood what I was,” Maki says. “That’s what AAGC means to me, and it’s truly like a sisterhood. It is truly like knowing that there are other people out there that really understand you, and that would be there for you, no matter what. We’ve truly realized now that we are so much stronger when we unite, we hold hands, and we say, ‘Hey, let’s take over the world together. it’s going to be so much easier, and it’s going to be so much more impactful.’”

Maki speaks with enthusiasm and deep passion about everything she does—she uses “life-changing” to describe meeting “Cloak & Dagger” fans—but her forthcoming project could be the most life-changing moment for Maki.

Maki is set to join Woody, Buzz Lightyear and the gang as Giggle McDimples in the hugely anticipated “Toy Story 4,” slated to open this June. Maki says her role has been under wraps for the last two years. She got clearance five minutes before our interview to talk about the project. While she can’t reveal much about Giggle’s story arc, Maki describes her character as “the coolest chick you will ever meet.” Giggle is a Polly Pocket-esque toy who serves as a police officer of Miniopolis, a miniworld in which she reigns over every creature—from “the poodles down to the tiniest bug.” The earliest drafts had Giggle wearing a dress, but over revisions, Maki says the character was later developed to be a cop.

“This is the coolest thing ever because, little girls, they’re gonna see this and be like, ‘I could be a cop, or I could be in positions that were essentially in the past for men only,’” Maki says. “That’s the most powerful thing about “Toy Story” is you could see yourself in all of these toys, and they all had a lot of heart. And that’s what I think is going to be coming with “Toy Story 4.” I saw the opening scene, and I broke down in convulsive crying. So, it’s going to be good.”

Suffice it to say, teenage Ally Maki would be over the moon at what future-self has accomplished—from feeling excluded as a child and craving belonging and sisterhood, to being a successful actor who’s part of both the Marvel and Disney/Pixar worlds (and meeting Tom Hanks) and connecting with women all over the world.

We’ve all seen the photos of Gal Gadot and Chadwick Boseman with young fans dressed as their characters from “Wonder Woman” and “Black Panther.” And it stands to think that young people, and girls especially, who grow up with other positive and nuanced representations of themselves on screen start believing it’s possible for them to pursue their dreams. Although it might have taken Maki a little longer to appreciate her identity and find confidence as an adult, her contributions through playing Mina Hess or founding AAGC could uplift many young girls and women who won’t have to wonder as much if they will ever see themselves represented.

“Most of my struggles and battles have been with finding my own self-worth as a human and finding where I fit in. And I think the greatest thing about everything that’s happening right now is that everything that has helped shape my career has been by me being 100 percent who I am,” Maki says. “That’s exactly where we’re heading, everyone feeling free and saying, ‘Wow, me being myself, that’s enough.’ It’s enough that people will care about what I have to say, and the story that I want to bring to the table.” She might’ve been a serial club quitter, but Maki is making a seat for herself at the table, and saving a few for others. 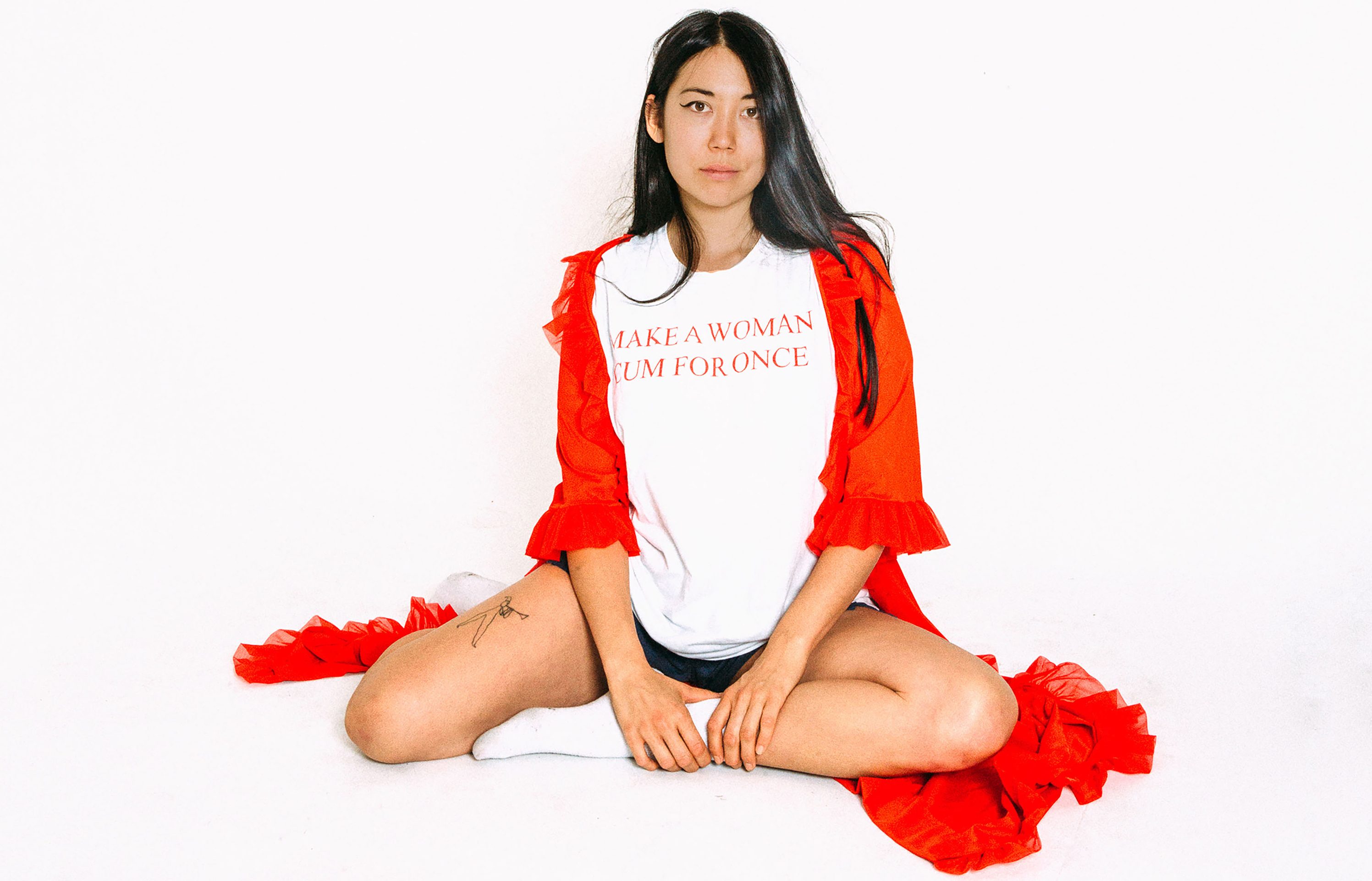