Nearly a month has passed since the day George Floyd, a 46-year-old Black man, was brutally murdered by a police officer in Minneapolis. As a result, protests have broken out nationwide and activists’ demands have been set, with some groups calling to abolish the American police force and others calling for radical reform. It’s time for Asian Americans to stand in solidarity with the Black community and show effective allyship in the fight against systemic racism.

Acts of allyship can start small, from sharing resources in our own social media feeds, to seeking out educational efforts from AAPI leaders and organizations. One notable example has come from Michelle Kim, CEO of Awaken—a workshop-hosting initiative aimed at developing meaningful conversations around uncomfortable topics. Kim wrote “20+ Allyship Actions for Asians to Show Up for the Black Community Right Now”  back in early May following the unlawful shooting of Ahmaud Arbery, but the list still remains relevant today.

First on Kim’s list is: “Don’t call the cops.” Contrary to popular belief, a police presence can actually make many people of color feel unsafe. As a result, many cities across the nation have called for a defunding of local police departments. The Minneapolis City Council has already voted to disband its police department and shift its focus to more moderate experiments that don’t involve armed officers.

Kim goes on to talk about how we as Asian Americans should confront our own racial biases and potential anti-Blackness tendencies. This involves a constant unlearning of the beliefs many of us are familiar with, and calling out racist behaviors when we encounter them during our daily lives. According to Kim, AAPIs should also go beyond educating ourselves, and start teaching families and friends about the realities of institutional racism.

While this may be a difficult conversation starter, readers can also find a great resource in Letters for Black Lives, a group of Asian Americans and Canadians who have crafted intergenerational letters to voice concerns and support for the Black community. The organization started in 2016 with 37 letters in 37 different languages, encouraging family members of immigrant communities to take notice of the Black Lives Matter movement. In 2020, the letters have resurfaced and been utilized by many community organizers as a way to get older generations of AAPIs talking about George Floyd’s death, as well as calling for justice to be executed.

If you or your family and friends have the means, Kim and many other activists have suggested monetarily supporting Black-owned brands and businesses, and donating to organizations that work to dismantle racism in the U.S. On an individual level, any of us can also sign petitions to demand concrete action for the many Black lives that have been lost, including George Floyd, Breonna Taylor and Ahmaud Arbery. And above all, support the peaceful protesters, join them if you can and stand by their side in the fight for equality and justice. 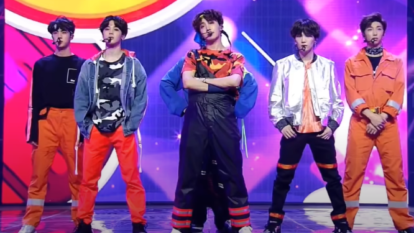 Global protests drawing attention to police brutality and the May 25 death of George Floyd have revealed unexpected heroes around the world. But few could have anticipated that K-pop […]