Global protests drawing attention to police brutality and the May 25 death of George Floyd have revealed unexpected heroes around the world. But few could have anticipated that K-pop Twitter fans (or “stans,” for the more hip readers) would swoop in to help.

In late May and early June, tensions rose across the United States and culminated in peaceful protests, violent clashes and widespread looting alike. Hundreds of thousands took to social media with hashtags like #BlackLivesMatter, #BlackOutTuesday and more to help spread information and resources through posts. In response, right-wing groups launched similar campaigns like #BlueLivesMatter, #WhiteOutWednesday and #WhiteLivesMatter.

That’s when K-pop stans decided to step in. Primarily on Twitter, users began posting a barrage of singing clips, memes, photos and fancams of their favorite stars, all with the right-wing hashtags, in an effort to bury the more hateful posts under a flood of K-pop content.

Under the new hashtag “White Lives Matter Most,” another user posted, “#WhiteLivesMatterMost Racists don’t get to speak. Stan Red Velvet,” with an accompanying dance video of the K-pop girl group.

Meanwhile, mega-stars BTS even weighed in on current events in a direct statement, also posted to Twitter. “We stand against racial discrimination. We condemn violence. You, I and we all have the right to be respected. We will stand together. #BlackLivesMatter.” 2NE1’s CL, Jay Park and many more Korean celebrities have also made public statements in support of the movement. BTS and label Big Hit Entertainment have since donated $1 million to the Black Lives Matter charity. 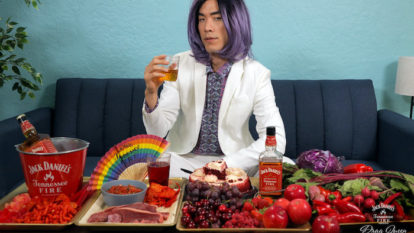 This weekend, Pride month is heating up—and no, we don’t mean the temperatures outside. (Remember that? Outside?) Starting on Saturday, June 20, get to know four famous and fabulous […]