In celebration of Asian Pacific American Heritage Month, the City of Los Angeles and Kore Asian Media are highlighting API women who have used their perspectives and voices to advocate for, and effect, changes they want to see in their communities.

Here are their stories:

–Anna Akana, an actress, comedian, writer and YouTube personality, has used her platform and personal story to talk to her audience about mental health awareness and API representation in media.

–Aquilina Soriano-Versoza, a co-founder and executive director of the Pilipino Workers Center located in Historic Filipinotown, fights for the rights and resources for domestic workers and low-income Filipinos.

–Cassey Ho is the instructor behind Blogilates, one of the the internet’s top female fitness brands, and an advocate for a positive and healthy body image.

–Chanchanit Martorell, the founder and executive director of Thai CDC, has worked for decades to bring economic self-sufficiency and human rights to Thais and other low-income groups.

–Doreena Wong is an activist and community organizer whose civil rights efforts include work in women’s and LGBT rights. She is the project director of Asian Americans Advancing Justice’s Health Access Project, and the founder of API Equality-LA.

–Esther Lim is the director of the American Civil Liberties Union’s Jails Project, and an advocate for criminal justice system reform.

–Maisie Chin is the executive director of CADRE, a South Los Angeles-based, parent-led organization that pushes for advances in access and quality education for black and Latino students.

–Milck, also known as Connie Lim, is the musician behind “Quiet,” the unofficial anthem of the Women’s March movement.

–Phung Huynh is a Los Angeles-based artist and educator whose art explores the notions of cultural authenticity and perspective through the lens of her identity as an Asian American woman.

–Sahar Pirzada is the co-founder of Vigilant Love, a grassroots organization combating Islamophobia and discrimination, and the programs and outreach manager at HEART Women & Girls, which raises sexual health and sexual violence awareness in the Muslim community.

–Sonya Passi is the founder of FreeFrom, a non-profit organization that helps domestic violence survivors gain financial independence through access to the judicial system and self-entrepreneurship. 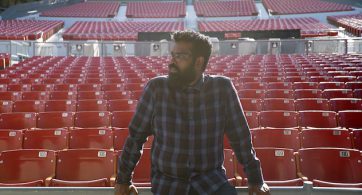