Here at Character Media, we always knew that Asian and Pacific Islander stars were golden. But after the 2023 Golden Globes, the rest of the world knows, too.

After two years off-air, the Golden Globe Awards made a triumphant return to the Beverly Hilton on Jan. 10. The evening proved especially fruitful for Asian creatives, as Ke Huy Quan and Michelle Yeoh both won acting awards for their work in “Everything Everywhere All at Once,” and M. M. Keeravani took home the Best Song – Motion Picture Award for the “R.R.R.” track “Naatu Naatu.” Korean American pianist Chloe Flower also performed throughout the ceremony.

Before the ceremony kicked off, Character Media stopped by the gray carpet to find out award nominee Dolly de Leon’s go-to boba (sorry, milk tea) order, “Knives Out” director Rian Johnson’s favorite Asian takeout restaurant, and how the “Everything Everywhere All at Once” team will celebrate their award wins.

Visit our TikTok page for more!

After Quan, Yeoh, and Keeravani received their awards, they headed to the backstage press room for interviews. Watch the videos below to hear about Keeravani’s inspirations in creating “Naatu Naatu,” why Quan is excited to see what comes next in Hollywood, and how Yeoh views her “Everything Everywhere All at Once” character, Evelyn Wang. 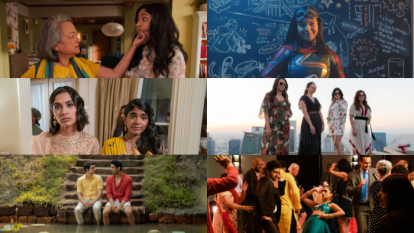 Check out these eight films and TV shows centered around uniquely South Asian characters and culture.