In the primordial grime and goop of Instagram—a social media platform better known for cultivating bodacious “IG baddie” personalities—emerges a new kind of comic artist. At the forefront of this e-comic movement is Maryland Institute College of Art student Alison Zai. Although you might not have heard her name, you may have come across her comics on the interwebs at least once. Her work is characterized by her signature brand of wry, deadpan humor and wildly playful color schemes. Zai began dabbling in the world of webcomics in the early 2000s, back when the art-sharing, social media platform DeviantArt was in its heyday. She first shot to internet fame in 2015 with her collection “Skeletons,” which featured sarcastic, socially awkward skeletons and funny bone-tickling puns.

Amazingly, Zai hasn’t faded into internet obscurity. Her 15 minutes have since extended into a strong, online presence with a considerable following. One of her latest comics, “Bee Real,” tells of a cosmic romance between a tiny bee assassin and the sun. Though short, it’s an epic tale of affection that touches on ennui, loneliness and the power of love and understanding. The comic accrued over a hundred thousand likes on Instagram. It was also Zai’s senior thesis. “I had the idea since freshman year of college,” Zai says. “Back then, my idea would be that the bee gets to the sun, and that’s where it would end. I’ve always wanted to revisit that comic. I’m actually glad I waited this long to finish it because I was able to put everything I’ve gone through into the final ending for it, and I’m really happy with how it turned out.”

What makes Zai’s art so compelling is that she’s able to distill very human, emotionally complex situations into silly, easy-to-digest comics. She likes to delve into topics like social anxiety and the thorny pitfalls of love, so that her readers don’t feel alone in their feelings. But it’s an endeavor that she ultimately labels as “selfish.” “I want to show people how I feel, and I want people to be able to relate to me,” Zai says. “We all get sad. Making art is my way of dealing, and it’s cathartic for me. It’s important for people to have something to relate to because everyone is struggling in their own way. That’s my main goal with storytelling, and why I like it so much.”

Though the ideas for her comics are usually drawn from her own life, Zai cites an unexpected source of inspiration: 17th century, Enlightenment-era philosopher Baruch Spinoza, a radical Jewish thinker who was excommunicated by the Talmud Torah congregation of Amsterdam in 1656. “For being in whatever century he was in, he was on another level, honestly,” Zai says as a twinge of enthusiasm infects her otherwise laid back, monotone voice. “I really respect all of the stuff he said. I would have totally hung out and smoked a joint with him. That would have been so cool.”

One day, Zai hopes to put her comics in motion. As a Bay Area native, she wants to leave the dreariness of Baltimore, head for sunnier skies in Los Angeles, and get a foot in the entertainment world, specifically in animation. “It was a good experience for me to see what it’s like here, but I’m ready to go back to California,” Zai says. “My main goal is to have my own cartoon. I would love to work on something on Adult Swim. Something a little more for mature audiences. I feel like I need to make art that provokes deep questions.”

Although she’s been drawing her whole life, Zai sometimes wonders what life would be like if she had never taken her art career seriously. She thinks she might have become a mortician. “I have weird, morbid curiosities,” Zai says. “That’s my side plan. My mind is very all over the place. That’s why my art is the way it is, and why it’s so chaotic. I could never be in a stagnant place. I always need to be working on something really crazy. I’m very determined about my future plans, but I could end up doing anything.”

At the time of interview, Zai had just one week of school left before she graduates with a Bachelor of Arts in illustration. Though some would be daunted at the thought of exiting a lifetime in the education system, Zai is unfazed. She exudes the same level of trademark calm as her comic characters do when faced with similarly wild situations. “It’s very important to embrace chaos,” Zai says. “I love chaos. I thrive off of it. It’s just life. You never know what’s going to happen.” 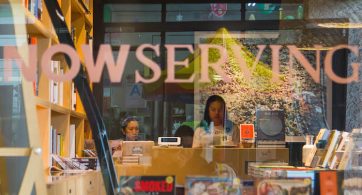