The Los Angeles cookbook store Now Serving occupies a small corner space in Chinatown’s Far East Plaza, just across the hall from the popular fried chicken stand Howlin’ Rays. Step inside and you’ll find a compact but well-organized enterprise warm with blond wood shelves overhanging a glass-top case filled with specialty kitchen items like oversized tweezers and chef knives. Next door is a floor-to-ceiling rack populated with food magazines and journals from around the world, and in the center is a long, dark marble table stacked with cookbooks, Japanese stoneware and other kitchen accessories. For the epicurean bookworm, it’s a tiny slice of heaven.

I first began visiting Now Serving soon after it opened in the fall of 2017, and was struck by how many of their Asian cookbooks were authored by chefs and writers with a decidedly post-immigrant, Asian Pacific Islander American point of view. The idea for this column sprung to life from those observations, and not coincidentally, almost every title I’ve reviewed was one I first saw at Now Serving. In many cases, those titles came recommended to me, appropriately enough, by the Asian American couple who runs the store: Michelle Mungcal and Ken Concepcion.

Both are Filipino American, but they up grew with different relationships to cultural identity, especially food. Concepcion was raised in and around New York, and his parents “really wanted us to assimilate,” he says. “My mom, she didn’t cook that many Filipino dishes. She cooked a lot of Italian American stuff, like baked ziti and turkey tetrazzini.” Mungcal, in contrast, grew up in Southern California’s San Gabriel Valley, close to Filipino neighborhoods, markets and restaurants. But eating Filipino wasn’t a norm for her though for special occasions. “If my mom had her say, it was always either Chinese food or steak,” she says.

In the mid-2000s, Concepcion was living in St. Louis, Missouri, and working in a bookstore where he began to read about food. That inspired him to explore the culinary industry, starting in restaurant kitchens and catering outfits. Just as he was on the verge of moving back to New York, in 2006, he landed an offer to work as a sous chef for Wolfgang Puck’s steakhouse, Cut, in Beverly Hills. Two years later, he met Mungcal at a Sharon Jones/Feist concert held at the Hollywood Bowl. The two began dating, and for Mungcal, it was like a new world of food had been opened up for her. “It was like nothing I’d ever experienced,” she says. “This whole idea of ‘chef-driven,’ I didn’t know any of that. I thought he was so cool.”

However, working in restaurants—the hours, the stress—isn’t always conducive to the long-term health of relationships. After several years of being together, something needed to change, especially as the two began to talk about starting a family together. The solution was Now Serving.

A cookbook store could keep Concepcion grounded in the professional food world, but with slightly saner hours. Moreover, he had a long relationship with working with books. “One of my first jobs as a teenager was working in a library, so books are just very comforting to me,” he says.

Most importantly, there was a need for such a store after the shuttering of similar shops like Cook’s Library and Cook Books. They wanted to fill the void, but it took three years for them to get everything organized. “We were just hoping that nobody would open one [before us],” Mungcal says.

From conception, the two wanted the store to reflect their individual strengths and sensibilities. Concepcion would be in charge of the cookbooks, especially given his connections to the restaurant world. Mungcal wanted to prioritize food-related magazines and journals. “I am a makeup artist and my sisters work in fashion, and so I always had a love for magazines,” she says. “Before Instagram and Pinterest, if you needed inspiration, you had to go to magazines.” In terms of Asian food-centric publications, Mungcal is a fan of the quarterly “Dill Magazine,” as well as the now-defunct “Cleaver Quarterly” and their 2017 cookbook, “The Illustrated Wok.”

Landing in Chinatown was more by happenstance than design. One of their friends from the Filipino American food world, Alvin Cailin, had already opened two businesses in Far East Plaza (Ramen Champ and Unit 120), and he recommended the mini-mall to them. “Before I opened up down here, I had never been down to Chinatown, and I had lived here for 10 years already,” Concepcion admits But he also repeated a point Mungcal had made earlier: “There’s something very comforting about Chinatown to Filipinos because whenever there was a special occasion—graduation, communion, a baptism—the restaurant that we would go after was always Chinese.”

Contemporary Los Angeles Chinatown has become a hub for various culinary communities, where one can still find old school Teochew diners alongside haute Filipino restaurants. Now Serving aims to serve those overlapping eater interests. Early after the store opened, Concepcion realized that they had to appeal to more than just hardcore gourmands. Even though he wants Now Serving to be a resource for “the chef who’s coming in from out of town and wants to see if we have any obscure Spanish cookbooks,” he also wants them “to connect to the 25-year-old kid who just got his first apartment and is trying to cook for himself.”

Concepcion could have been describing me (except I’m certainly not 25 anymore). The first time I visited the store, I asked for recommendations that could help me learn to cook different Asian cuisines at home. One of Concepcion’s recent favorites is Vietnamese Food Any Day, by the prolific Vietnamese American cookbook writer Andrea Nguyen. She recently had an author’s event at the store, and Concepcion lauds her latest book by saying: “Her whole goal is to get people to accept immigrant and Vietnamese culture, and how you can make Vietnamese food without having to go to an Asian specialty market. There’s no pretense of like, ‘This is how they do it in Saigon.’ She wants middle America to be able to have the tools to make Vietnamese food.”

Home cooking is certainly on Concepcion and Mungcal’s minds these days. They started Now Serving, after all, as a precursor to starting a family. They now have a 1.5-year-old daughter, Frankie. I ask them about the kind of culinary environment they want Frankie to come of age in. Concepcion laughs. “We definitely don’t want her to be a foodie,” which to him means “someone who just follows trends … and is all about consumption.”

Mungcal adds, “That’s a loaded question for me because I don’t really cook a ton, and I haven’t cooked Filipino food. My mother passed away, and I need [Frankie] to feel connected to … where we came from. I don’t want her to grow up not knowing what our food is about.” Mungcal’s apprehensions here are understandable. Every generation worries about the next generation’s relationship to heritage. But given that Frankie’s parents run one of the premier cookbook stores we have, she’ll likely have countless opportunities to learn different culinary traditions, Filipino and otherwise.

My most recent trip to Now Serving was to moderate a conversation with Australian chef Andrew McConnell of Supernormal and fellow Melbournian Grant Smilie, who manages the West Hollywood restaurant E.P. & L.P. Full disclosure: I’ve moderated several similar events at the store, and it’s always been a grand opportunity for me to learn more about various foodways, whether it was chatting with Nicole Ponseca about contemporary Filipino cuisine, learning about regional Swatow dishes from Diana Zhang, or discussing the parallels between Melbourne and Los Angeles’s immigrant-influenced dining with Smilie and McConnell. For cooking and eating enthusiasts, a place like Now Serving is an increasingly rare resource in a world where physical bookstores seem like a quaint anachronism. But, at their best, bookstores are more than the sum of their wares. They also offer opportunities for interaction and exchange, to broaden not just one’s palate, but also your mind.

Oliver Wang is a professor of sociology at CSU Long Beach and co-hosts the music appreciation podcast Heat Rocks. 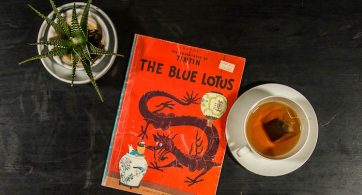 I was visiting my aunt in Little Saigon when I first saw her collection of “Tintin” comic books. A souvenir from her childhood in the real Saigon, they’d been […]