It was inevitable that cartoon superfan Jessica Gao would transition from watching cartoons to creating them. “It’s just the next step in your Pokemon evolution,” she said.

A television writer and producer best known for her work on Adult Swim’s “Rick and Morty,” in particular the fan-favorite episode “Pickle Rick,” Gao knows how to bring a character’s vulnerability to the forefront of any story, even if that character is Rick, a brilliant, deranged scientist. Her ability to peel back the top layers of the notoriously irreverent show on Adult Swim has wowed fans and critics alike, won her an Emmy and led to a deal with ABC to develop a family comedy.

As a latchkey kid, Gao spent much of her childhood watching cartoons and reading. She studied art in college, but didn’t find work in her field after graduation. It wasn’t until she landed a writing fellowship with Nickelodeon years later that she went back to art and reignited her passion for storytelling.

Gao’s had two turning points in her career since then. The first was when she got hired to write for HBO’s “Silicon Valley” for its premiere season in 2014. The episode “Signaling Risk,” in which venture capitalist Erlich Bachman hires a graffiti artist to create a logo for the newly minted Pied Piper company, was Gao’s first at-bat writing for a show that wasn’t aimed at children. “You tend to get pigeonholed in those genres,” Gao said. “If that’s where you start, it’s very hard to break out of it. ‘Silicon Valley’ allowed me to be seen as a ‘legitimate’ writer by other shows.”

The second was writing “Pickle Rick,” which earned the series the best animated program Emmy. In the absurd and absurdly violent 23-minute episode, Gao uses the show’s madness as a means through which we find truth — in the episode, Rick turns himself into a literal pickle to get out of a family therapy session. That, of course, backfires when he loses the serum to turn himself back into a human, forcing Pickle Rick to create an exoskeleton out of rats and cockroaches to make himself mobile, shoot and kill his way out of a heavily armed building and, ultimately, end up on the therapist’s couch anyway, surrounded by family, to confront the one thing he has no real control over: his own genius.

With those two milestones in the bag, Gao’s hard at work on her next big project — an ABC comedy starring an Asian family. The project doesn’t have a title yet, but it will center on Janet Zhao, a first-generation Chinese American who is forced to square with her estranged relatives after she’s inherited her wealthy grandmother’s fortune. The premise of the show is (unfortunately for Gao) completely fictional, but many of its themes and characters have been drawn from true experiences. “To me, the tightrope that Asian Americans have to walk is navigating between two cultures that are often at odds with each other,” Gao said. “It’s hard to grow up American when your family is solidly Asian.”

Gao hopes to zero in on that tricky tightrope of values in her new series. She wants to ask Asian Americans the tough questions: “How do you set healthy boundaries with your family when setting boundaries is seen as as disrespecting or rejecting your family? Is there some magical middle ground where everyone is satisfied? Or is one side always going to be unhappy?” Gao, added, “The biggest conflict of the series is self-care versus family.” 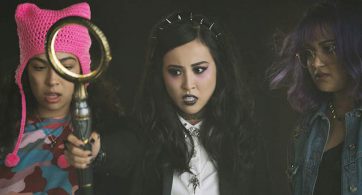