In the wake of a series of tragedies that struck the nation this week — which left five Dallas police officers shot dead, seven injured and two civilians also injured during a Thursday protest following the killing of two black men, Alton Sterling and Philando Castile, at the hands of law enforcement – Asian American leaders and advocates are speaking out.

“We must do better than simply express outrage [at the death of Sterling and Castile], as these expressions by themselves leave communities of color with the impression that racism and excessive force have no end,” the Japanese American Citizens League (JACL) said in a statement Friday. “These communities will not tolerate it, nor should we. We cannot simply reiterate our emotions each time these incidents occur.”

We do not mourn murder through murder. We do not create justice through injustice. My thoughts are with all in #Dallas & across the US today

Video footage of Sterling, 37, being held down on the ground by Baton Rouge police and repeatedly shot on Tuesday went viral on social media; the very next day, in Falcon Heights, a live stream of Castile, 34, in the driver’s seat, blood staining his white T-shirt, was uploaded onto Facebook by his girlfriend and witness Diamond Reynolds, who said he was shot while reaching for his drivers license in his pocket.

“We call for state and federal government leaders to act swiftly and decisively to implement policies, procedures and legislative actions that address racial bias and profiling, police misconduct, and end excessive police use of force,” AAAJ said. “We need law enforcement to commit to tactics that de-escalate or disarm, not result in more loss of lives in our communities of color.”

JACL, citing a Washington Post database, said more than half the 509 people who have been shot and killed by police in the country this year have been people of color.

“JACL remains committed to the struggle for racial equity and will continue to work alongside our partners in the pursuit of institutional change because our own historic experience obligates us to do no less,” the organization said, all the while maintaining that confronting racism does not mean condoning the Dallas shootings.

Congresswoman Tammy Duckworth, of Illinois, called the shootings – initiated by a sniper at what began as a peaceful Black Lives Matter rally – an “atrocity.”

The suspect was killed by a robot-controlled explosive device operated by police Thursday.

“[The Dallas shootings] will only serve to distract from and undermine the efforts of peaceful protesters seeking an end to the needless violence that took the lives of Alton Sterling and Philando Castile this week,” Duckworth said. “Now is the time for our nation to come together and unite against all hateful violence.”

“The past few days have been days of unimaginable hurt across our country,” said Rep. Judy Chu, who heads the Congressional Asian Pacific American Caucus. Chu expressed her condolences to families of the Dallas policemen, Sterling and Castile. “As we mourn, we must remember that we do not mourn murder through murder. Nor do we create justice through injustice. … In the coming days, weeks, and months, we must focus on how we can come together and create more trust between the police and the communities they protect. That trust is essential to the future of our nation.” 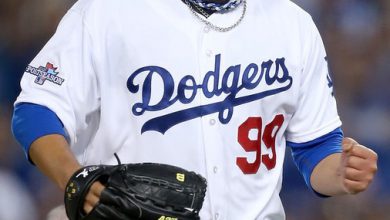 The Korean Monster is due back on the Dodgers mound tonight against the San Diego Padres for the first time in two years. Los Angeles Dodgers pitcher Hyun-Jin Ryu, […]