A Portland-based Asian American dance-rock band is at the center of an upcoming Supreme Court case that will determine if the group can officially name themselves “The Slants.”

Lee v. Tam, set to be argued on Jan. 18, will see if the band — currently comprising four Asian Americans — can trademark a name which contains a historically racial slur against people of Asian descent.

Simon Tam, the band’s bassist and a founding member, released a statement in 2015 saying the group decided to name themselves what they did because they had “taken ownership” of the slur and consider it a “point of cultural pride.”

“Our band uses our name to refer to our perspective and experiences in life as people of color,” Tam wrote. “We choose to empower others that way.”

However, when they attempted to trademark the name years ago, it was denied by the U.S. Patent and Trademark Office per the Trademark Act of 1946, which rejects names that “disparage persons.”

Though the trademark was rejected, it did not mean the band could go by the name “The Slants” — just that they could not have exclusive copyrights to it.

The dispute eventually found its way to the U.S. Court of Appeals for the Federal Circuit in Washington, D.C., where Judge Kimberly A. Moore sided with the band and wrote that the First Amendment “protects even hurtful speech” in a 9-3 majority decision.

The Patent Office asked the Supreme Court to hear the case in hopes of being able to retain their current right to deny “disparaging” trademarks, and in an unusual move, the band agreed, saying that the case’s decision is important enough to play out, according to the official SCOTUS petition.

“I’m very confident that the Federal Circuit got it right, and looking forward to resolution of this long process and vindication of my right to receive a trademark registration for THE SLANTS,” Tam told ArsTechnica.

Asian Pacific American community leaders in Portland quickly came to the band’s aid early on in their battle with the patent office. “[The name] does not disparage Asian identity,” wrote Mari Watanabe, the then-executive director of the Oregon Nikkei Endowment in a public letter of support. “It celebrates it.” 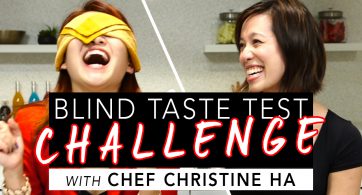 “MasterChef” Season 3 winner Christine Ha did a blind taste test challenge with our host Emily Tang. They each tried to guess which flavor of Kewpie salad dressing they […]