Since COVID-19 coughed and wheezed its way onto the international scene last December, United States health care workers have been met with a grim set of occupational stressors. Due to the global shortage of personal protective equipment (PPE), staff treating infected patients risk contracting the virus themselves, but the U.S. government has yet to enact stringent hospital requirements to ensure the safety of its nurses and doctors. Combine these obstacles with a dearth of testing kits, grueling hours for low pay and the emotional toll of treating sequestered patients on the brink of death, and the true, bleak reality of these professionals’ lives begins to come into focus.

“Sometimes I don’t want to go to work because I don’t know if I’m going to have the PPE to protect myself or my patient,” says Brittany*, a respiratory care practitioner in West Covina, California. “Originally it was just the gowns that were missing, but now it’s come to the point where gloves are dwindling as well. [Management’s] excuse was, ‘We’re hiding it now because family members are taking them.’ Well, we’ve been on lockdown for a month. There have been no family members that are coming to visit, so that’s a total lie.”

Jacob*, who lives in Los Angeles and works as a hospital administrator, has been made a COVID-19 infection control response director and he’s more than a little frustrated. To him, the health care system’s lack of PPE is a failing on the part of the U.S. government. “Because we’re so poorly prepared as a country—though we had ample time to prepare for this—the hospitals don’t have anything,” Jacob says. Like many medical workers in his position, he’s been forced to reuse his mask multiple times. “I’ve literally had the same N95 (a medical grade mask) for a whole week, and I just spent five hours in line at a licensed facility to get a box of them.”

Due to the shortages, the Centers for Disease Control and Prevention (CDC) have controversially begun encouraging health care workers to use bandanas or other cloth materials if no respirators are available, even though no evidence currently exists that such a method is effective at preventing infection. And though the Occupational Safety and Health Administration (OSHA) states a respirator can be reused so long as it “maintains its structural and functional integrity and the filter material is not physically damaged or soiled,” manufacturer recommendations say the masks are only intended for one-time use.

Brittany is of this belief. “If you look at the actual [Food and Drug Administration] regulations and the actual mandates for the mask that we get provided with, the company actually goes against that,” she says. “There’s nothing that implicates you’re able to sanitize these masks, and if there is a way to sanitize it, the cleaning solutions could compromise their effectiveness.”

But lack of proper protection is far from the only problem. Due to the U.S. shortage of COVID-19 testing kits, medical centers are often unable to even provide their workers with the means of determining whether they’ve become infected. Hospital staff are usually only granted a test kit if their symptoms are severe, such as having shortness of breath or a fever of over 103 degrees. This means denying nurses and doctors who already show other COVID-19 symptoms, like coughing, headaches and low-grade fevers—thus potentially allowing them to infect other patients.

“We had a 34-year-old nurse pass away last week,” says Brittany, who knew the man as a “floater” who worked at her hospital and its sister hospitals. Initially, the nurse had turned to a local medical facility upon feeling sick, but was told to go home on account of his symptoms being too mild. (According to the World Health Organization, or WHO, COVID-19 sufferers may not need to be hospitalized unless there is a fear of rapid clinical deterioration.) He returned to the facility when his symptoms worsened, but was turned away a second time. “He died at home,” says Brittany. “It took a week.”

Amy*, an ICU nurse working in San Francisco, is particularly dismayed at how little administrators seem to care for the safety of their employees. “Health care workers are put at the bottom of the list of who can get tested,” she says. “I think it’s because the hospitals don’t want to be responsible for you being exposed, even though they pretty much don’t give you enough protective equipment.” In particular, she resents how unwilling her bosses are to inform staff when co-workers have fallen ill. “We actually have, at least to my knowledge, three nurses who have tested positive for COVID. And unfortunately, I only found that out because we’re a very close-knit group of people. Management doesn’t tell us [what’s happening].”

Amy believes her co-workers fell prey to COVID-19 because hospital administrators are not taking more aggressive steps toward preventing infection among workers. “A lot of people don’t understand that [the virus is] very spreadable in the hospital, too,” she says. “And I hate to say it, but it’s the way hospitals write these policies … we’re spreading the virus to other patients who don’t have it.”

Though dozens of American health care professionals have already died after being exposed to COVID-19, the Center for Public Integrity reports that the U.S. Department of Labor has refused to issue an emergency rule that would mandate hospitals to create a plan protecting staff from exposure. And though the CDC and OSHA have issued multiple recommendations on how to keep hospital staff safe from the disease, they’re just that—recommendations. Employers can still choose whether or not to implement them, and OSHA isn’t enforcing any on-site inspections to ensure hospitals are actually cooperating with safety guidelines.

For Amy, the hardest part about working in health care right now is feeling like administrators aren’t willing to protect their employees during the pandemic. “Management and hospital CEOs are doing the best they can while paying the least amount of money. They stay in their offices or come down every so often just to boost our morale,” Amy says. “They make the decisions. They’ll be the ones to talk to the media about how they’re doing X, Y and Z. But they’re not the ones working and dealing with [the effects of the virus]. It’s like people saying they went to war when they really didn’t.”

Even so, with more and more health care professionals falling ill (more than 9,000 health care workers had contracted the virus as of mid-April), the increased turnover rate sees professionals like Amy not only working more cautiously, but also for longer hours. Though most elective and non-emergency procedures have been postponed or canceled, hospitals are scrambling to treat the mass influx of COVID patients, many of whom require around-the-clock supervision. And that means having health care workers put in longer hours for a system that already chronically underpays its employees (registered nurses, for example, make less than $72,000 annually at the median).

But the resulting burnout is far from just physical.

Health care workers must face another sobering reality in having to watch patients die alone. Due to the high risk of spreading infection, all 50 states, and other countries around the globe, are forbidding visitors of COVID-positive patients from entering hospitals. Though regulations vary by hospital and state, many facilities have enacted a no-visitor policy to limit the chances of carriers infecting hospital staff and patients with the disease. Unsurprisingly, the resulting deaths of solitary COVID victims leaves both family members and hospital staff devastated.

Brittany has witnessed several of these heart-wrenching scenarios at work. “You see this patient dying so fast; they’re alone, they have no family members,” she says. “You’re not allowed to gather [for their funerals]. People can’t even mourn properly. On the other side, as a family member thinking about your [loved one] on their deathbed, how sad is it that you can’t be there? It’s very traumatizing and heartbreaking to think you’re so hopeless in this.”

Amy shares Brittany’s pain, but adds that she and her fellow nurses still try their best to help patients feel less lonely, despite being without family and friends. “It’s just us there to hold their hand or try to make some kind of human interaction, even though we’re gowned up head-to-toe,” she says.

In Orange County, California, ICU nurse Carly* recounts how, just the day before, her team discussed an elderly man in their ward who was suffering from COVID-19. It had been decided that the patient would be marked as a DNR, or “do-not-resuscitate.” “If he ends up coding,” Carly says, “if his heart stops, that means a lot of people need to be in that room, and we’re so limited on the PPE we need to wear that it’s going to be really hard.” While some hospitals might make special exceptions for visitors regarding end-of-life patients or women in labor, Carly’s hospital has explicitly barred all visitors of COVID-19 patients.

Still, in spite of all the physical and emotional hurdles medical staff must endure in the midst of this pandemic, many have found solace in their fellow frontline workers. In March, New York float nurse Emily Fawcett launched “Hope Huddles,” a practice in which emergency room staff group together between shift changes to share good news about their patients. A way for doctors and nurses to uplift one another’s spirits and spread positivity among workers, the initiative has since caught on in hospitals across the country.

Furthermore, Annette Kennedy, president of the International Council of Nurses (ICN), which represents more than 20 million nurses worldwide, has castigated the Trump administration for halting funding for the WHO. “All countries working closely with the WHO must collaborate and stand together if we are to prevent many more lives being lost to this pandemic, including those of the courageous nurses who put their lives on the frontline regardless of politics or nationality,” Kennedy said in a mid-April ICN press statement.

Meanwhile, back in California, Amy finds the strength to continue the battle against COVID-19 by depending upon her fellow staff members. Their mutual encouragement of one another helps her get through each day. “My co-workers are amazing,” she says. “There’s just this mentality of we’re in this together, so we help each other out as best as we can. It’s been great to just have that bond, especially with the kinds of things we have to deal with.” 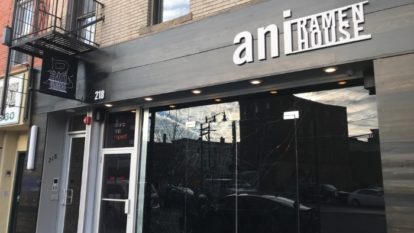 Governments throughout this country have deemed restaurants as essential, allowing these businesses to stay open during the COVID-19 outbreak. But the announcement came with a major caveat: delivery and […]