The name Daniel Kang might not ring a bell, but you might be familiar with the name Donald Choi, the uncomfortably awkward turned supportive best friend on Netflix’s black dramedy “Insatiable.”

A controversial show due to its satirical take on body image and sexuality, “Insatiable” follows the chaotic aftermath of a former fat kid turned skinny (Debby Ryan) who seeks revenge on her bullies by competing in beauty pageants, enlisting the help of a tarnished lawyer (Dallas Roberts) tackling his own insecurities through pageant coaching. It starts out as messy as it sounds, but Kang says it was always the show’s intention to be funny and relatable.

“It’s almost like saying, ‘This is how you should not act.’ Something like ‘It’s Always Sunny in Philadelphia.’ These are terrible people but in a way it’s sort of cathartic,” Kang, 22, says. But despite the absurdity of the characters’ decisions, the plot more or less sees itself through as the consequences of the character’s actions unfold. “I think once people actually saw the show and saw what we were trying to go for, they were like, ‘Oh, I get it,’ as opposed to jumping on the hate bandwagon.”

It’s easy to understand why Kang understands Donald so well. It’s the only role he’s really had time to grow with thus far in his career. “The trajectory of the character kind of paralleled my own experience with just being an actor and having all of this crazy stuff come at me at once. I was learning about this life just as how Donald was sort of learning about what it means to have relationships with people and [his own] feelings,” he says.

Kang says comedies have been an underlying theme throughout his life. Growing up in Georgia and Missouri, he first felt a flicker of interest for acting watching television—so much so that, as a teenager, he asked his mom if the family could move to Los Angeles. Though he was immediately shut down, the thought never completely left his mind, even as a college student at the Georgia Institute of Technology, where he promptly switched from pre-med to a liberal arts major his first week.

“I just remember seeing a lot of my friends getting their suits and resumes ready for career fairs and stuff, trying to get jobs at all of these super high-tech companies like Google or Tesla. And I just had absolutely zero interest in that,” he recalls. “It was really one of those ‘A-ha’ moments like, ‘Maybe I should try acting.’”

While Kang waits to shoot Season 2 of “Insatiable” in March next year, he’s beginning to dip his toes into wider waters. Catch him in the opening scene of the upcoming film “The Front Runner” starring Hugh Jackman and J.K. Simmons, which comes out Nov. 20. It’s a minor role; he plays an engineer. But it’s a five-minute one-take that took several hours to rehearse, and the role required a lot — incomparable to his preparations for “Insatiable,” according to Kang. Sweating under his wig, smoking fake cigarettes in a van on the streets of Atlanta, Georgia, in the scorching August heat, Kang and the cast rehearsed from 9 a.m. to 4 p.m. in order to perfectly time the scene as the sun set.

“There’s a huge list of directors that I would love to work with: the Coen brothers, Paul Thomas Anderson, Quentin Tarantino, Denis Villeneuve,” to name a few, he said. His personal affinity for black comedies seems to be directing what he envisions for his acting future, but the hungry actor is open to whatever opportunity swings his way. 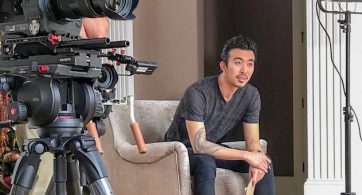