Watching “A Legendary Christmas,” it’s easy to get swept away in the charm of John Legend and the biting humor of Chrissy Teigen against the backdrop of a beautiful, tinsel-studded sitcom set. And it’s easy to forget that someone is working behind the scenes making all of the magic happen.

Kulap Vilaysack is a jack-of-all-trades. She has been an actress, writer, and comedian, but has found her ultimate calling as a showrunner. Vilaysack began her first foray into show business as an actress and is perhaps most well-known for “Bajillion Dollar Properties,” a show parodying Los Angeles’ cutthroat real estate business which she produced and created.

Her most recent project was a “A Legendary Christmas with John and Chrissy,” a 45-minute long special with a distinctly homey ’90s sitcom vibe and an eclectic, star-studded cast, from Stevie Wonder to Awkwafina to Kim Kardashian.

Vilaysack said she thrives in positions where she can shepherd a project to completion. “A showrunner is in charge, and it’s so important that they create a healthy ecosystem so that everybody can do their job well,” Vilaysack said. “It’s important to me that people are taken care of that. That they [feel] respected.”

The set design and soundtrack of “A Legendary Christmas” feels like a friendly throwback. Punchlines are accentuated with laugh tracks, jokes are delivered with poignant pauses, and guests are introduced with rounds of applause. As a young girl growing up in her mom’s restaurant in a small town in Minnesota, sitcoms were a central part of Vilaysack’s everyday life.

“From old sitcoms like ‘I Love Lucy’ to ‘TGIF,’ [sitcoms] were a huge part of my life growing up,” she said. “I would be in the back cutting veggies, deveining shrimp, wrapping wontons and watching ‘Full House.’”

Despite her fascination with television, Vilaysack never saw a future for herself in show business. That is, until a high school English teacher saw something in the shy Vilaysack that she couldn’t see in herself at the time; he encouraged Vilaysack to enroll in a speech class. Vilaysack soon found herself thriving in theater and found that she had a knack for humorist interpretation. Even today, Vilaysack’s work is characterized by her trademark sense of humor.

“I had a tough childhood,” Vilaysack said. “Humor was a nice release valve in our family as a whole.”

However, despite her interest in performing, Vilaysack didn’t see acting as a practical profession to pursue and treated it more as a hobby. Instead, she moved to Los Angeles to pursue an associates degree at the Fashion Institute of Design and Merchandising. Right before she was set to graduate, she realized that it wasn’t the best fit for her. So, she started attending acting classes at The Second City. That led to the Upright Citizens Brigade Theatre, which then led to a memorable role as a Benihana waitress in “The Office.”

But even after beginning an acting and producing career, Vilaysack still felt adrift from Lao culture. Around the time that she began working on the set of “Bajillion Dollar Properties,” Vilaysack began working on “Origin Story,” an autobiographical documentary about her complicated relationship with her mother — and her physical and emotional journey to find her birth father.

“[It’s] about finding where I come from, and in many ways helped me realize and understand who I am,” she said. “[It’s] absolutely about me finding my biological father that I never knew … and being able to move on and accept who I am.”

“Origin Story” is Vilaysack’s grand oeuvre that had been in the works for about five years and recently started making film festival rounds in January. The production and release of “Origin Story” represented a transformative moment in her life. As much as she did enjoy acting and believes in the power of representation, Vilaysack realized she was happiest working the magic that goes on behind the camera, not in front of it.

“As painful as the process has been, it’s brought so much to me and made me stronger and more skilled,” she said. “I really find creating shows and worlds and collaborating in the way that I get to with developing shows and showrunning like ‘Christmas with John and Chrissy’ really satisfying.”

After traveling to Laos during the filming of “Origin Story,” Vilaysack realized she needed to find a way to connect with her community in Los Angeles. So Vilaysack started an organization, Laos Angeles, that aims to cultivate a sense of community for Lao American creatives and to promote their work. The organization is Vilaysack’s proverbial baby.

“We are all by and large a group of people because of U.S. involvement in the Vietnam war,” Vilaysack said. “There’s an unspoken connection and similarity between all of us. It’s about creating a community where there was none. I’s just being able to be understood without saying anything by other people. It’s a beautiful and valuable thing and I’m so grateful.” 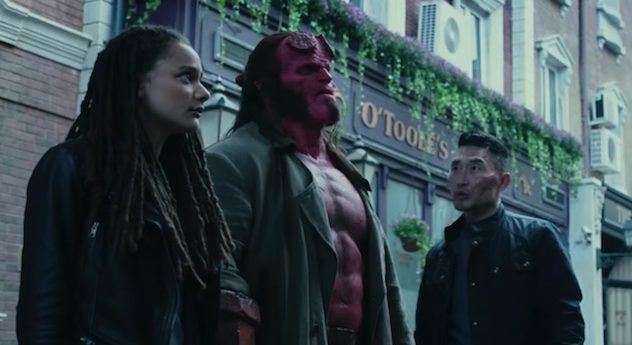 Everyone’s favorite half-demon, “Hellboy,” is back again doing what he does best: cracking heads and cracking jokes. But this time, things are a little different. Perpetually caught between the […]