On Dec. 12, young fans of the profanity-packed superhero Deadpool will be getting an early Christmas present. A new edited, PG-13 version of the movie will be released with 20 minutes of additional, never-before-seen footage.

True to Deadpool form, the story is going to be told through a slightly meta-lens. In this version of the film, the anti-hero has kidnapped Fred Savage and forces Savage to listen to him tell the kid-friendly version of “Deadpool 2” à la Princess Bride.”As an added bonus, $1 from every ticket sold is going to the charity, F‐ck Cancer (temporarily renamed Fudge Cancer). In this “nice” version of “Deadpool 2,” Shatterstar, played by Lewis Tan, will be getting some extra screen time as well.

Best known for his role as Gaius Chau in “Into the Badlands,” Tan plays the katana-wielding, genetically-engineered member of the X-Force in “Deadpool 2.” Growing up with a father well-schooled in the martial arts, Tan is known for his mastery of kickboxing, Muay Thai and jiu-jitsu. And — he even does his own stunts.

Tan had already made his Marvel debut as a drunk villain on “Iron Fist,” but Tan’s role as an X-Force member made serious waves in the geek universe due to his serious martial arts skills and the fact that Shatterstar was being played by a mixed Asian American actor.

As for the New Year, Tan’s 2019 seems bright. Though there aren’t set release dates yet, he will be coming back to the third season of  “Into the Badlands” and appear as a series regular in Netflix’s “Wu Assassins.” 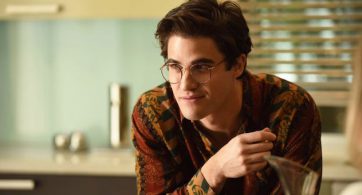 Darren Criss, who won an Emmy earlier this year for his critically acclaimed performance in “The Assassination of Gianni Versace: American Crime Story,” was nominated for a Golden Globe […]