Back in the ’90s, the indie comedy Swingers popularized the “three day rule,” which said you had to wait three days to call someone once she’d given you her number. Supposedly, it was the perfect amount of time to let her know you were interested but not desperate. Because, you know, calling a girl any earlier obviously makes her think you want her babies. We wouldn’t want that now, would we? (Can you feel my eye roll?)

Flash forward to 2014, where this rule is basically nonexistent. Because let’s be honest here – who starts off with a call these days? Instead, our go-to method of breaking the ice is texting, and with this new avenue of flirting comes a whole new set of rules.

Now fellas, if you’re under the impression that you can’t ruin your chances with improper text flirting (and it is clear that many of you are under that impression), then this will be a rude awakening. You would think that texting generally results in fewer faux pas since people have time to think about what to say, but as it turns out, many still need a lesson or two on proper text flirting. Trust me, it’s pretty easy to come off as a creeper in a world where we all overanalyze smiley faces and ellipses …

But have no fear! We’re here to help you navigate through this complicated world of text flirting. If you’re doing any of the following, then I urge you to immediately stop. You’re not flirting; you just may be creeping someone out.

ONE WORD RESPONSES
If you were in a bar flirting with someone, you probably wouldn’t stick to one-word responses, right? So why on earth would you think that one-word responses would work out for you via text? No, these short responses sound just as uninteresting in text as they do in person. And if “sup” is actually the most charming and intriguing conversation starter you can think of, then even I don’t have the skills to help you.

Please tell me why some people actually think this is flirting? Last I checked, this doesn’t make me feel like you legitimately want to talk to me. Honestly, it just feels like you couldn’t decide between texting or playing a game of solitaire. Go ahead and text your friends out of boredom, but don’t use this move in the text flirting world. You’re basically trying hard to seem uninterested when in fact you’re interested. See how that’s counterproductive?

PERSONALITY SWITCH
If I ever enter the online dating world, my biggest fear would be that I’d finally meet up with someone only to discover that they’re nothing like their profile description and chats. With my luck, the 6-foot, 25-year-old would turn out to actually be a 40-year-old with a bad habit of staring at cleavage. Am I maybe scaring myself by thinking the worst? Probably, but I digress.

The point is, you don’t want to have someone believe you’re one way via text, only to discover you’re a completely different person in real life. Texting can already feel rather impersonal. Don’t take it one step further by faking it.

ABRUPT AND INAPPROPRIATE
I will never understand this, but some guys like to abruptly stop your nice, innocent text conversation with inappropriate comments. I’m not talking about guys who try to make you laugh with a joke. I’m talking about boys who legitimately think a random outburst of lewd sexual requests will work. (Excuse me while I go throw up real quick.) If you don’t believe me on this one, go and check out straightwhiteboystexting.tumblr.com. Go on, I’ll wait.

Don’t be gross. It’s that simple. If I hardly know you and you decide to take the conversation there, you’re not being flirtatious. You’re just turning me off.

DRUNK TEXTING
Flirting is a rather tricky business in itself, and if you really like someone, I seriously doubt you’d want to ruin it with drunk texting. You could get emotional or inappropriate or end up regretting the words your intoxicated little fingers spelled out – legible or not. Worst of all, don’t send your ex flirtatious drunk texts. You’re basically asking for regret with that one. Friends don’t let friends drink and text. Remember that.

TEXT ON TEXT ON TEXT
Maybe you’ve just started to date someone and you can’t stop thinking about them. Ah, the honeymoon stage. As romantic as that is, I’m going to go ahead and guess that you both still have lives to live outside of each other. So try to make sure you give them some room to breathe. If they haven’t responded to your text from five minutes ago, it’s probably not the best idea to send them three more texts until they respond.

STAYING IN TEXTING PHASE
Yes, we certainly live in a world where texting is the initial platform for flirting, but don’t forget to move forward. You cannot get to know someone fully through text alone, so make sure you transition to phone calls, video chats and best of all, in-person dates. I know texting feels safe, but it’s never quite as good as in-person flirting.

I know it sounds like there’s a lot that can go wrong with text flirting, but as long as you stay away from these improper moves, you may just successfully avoid being a creeper after all. If you get nervous, remember that this is the easy part – there will be much more ways for you to mess up in person.

This story was originally published in our Fall 2014 issue. Get your copy here.
Photo courtesy of www.alleywatch.com 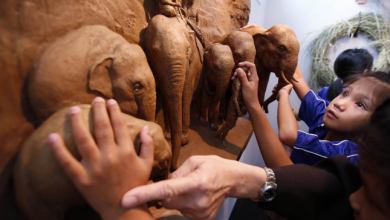 The Thai Ministry of Tourism joined forces with Thai universities such as Chulalongkorn University and Silpakorn University to fulfill a single goal: To create a space where the visually […]